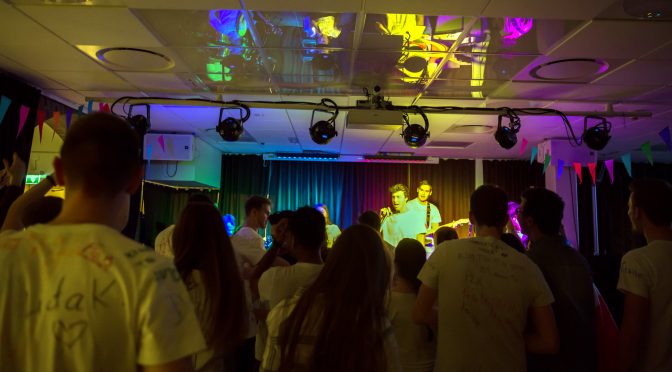 “Wear a white t-shirt” was the motto of this semester’s Goodbye evening organized by ESN, what ended up in a quite colorful celebration. Photo: Raphaela Ossberger/Eduardo Perdigão Drapier

After five months in Molde, it was time for HiMolde’s exchange students to gather for an atmospheric farewell party with loads of music and a special dress code: White t-shirts – for a very specific reason.

New university, new friends and new adventures: That’s how you can summarize the semester of HiMolde’s exchange students. Apart from an uncountable number of pictures, which partly where printed and hung up like a little Erasmus photo exhibition, the white t-shirts the students were supposed to wear at the party will be an eternal souvenir for the 5 months spent in Molde. Initially as white as the snow we recently had in Molde, the shirts quickly served as tool to collect signatures, little messages and greetings and paintings from the fellow students and friends.

Literally having the Norwegian flag in the background, the students took the chance to capture also these last moments together and took pictures in a photo booth provided by ESN. Yet, pain of parting? Not at all, too good was the atmosphere in Smuget on that evening.

Arno De Letter and Ilias De Wit, exchange students from Belgium, together with Hedda Nødtvedt kicked-off the party with three soulful numbers and made the partiers gather in front of the stage.

The musical students also used this evening to show appreciation for the efforts SiMolde’s Rolf Magnus Orø made during the semester: “Thank you so much for your positivism. You were the one who made all this possible for us!”

Then HiMolde’s student band “50%» band took over and performed one last gig before four of the six band members will continue their studies back home. By playing a mix of new and old songs from their first performance three weeks ago, lead singer Anastasia Fergyuson, Simen Fjælberg, Pavel Brlica, Luca Sternecker, Ilias De Wit and Sarp Tezonarici electrified their excited audience.

It is not surprising that also DJ Daniel Schempp, who once again catered for a joyful atmosphere, had no melancholic songs on his play list either, “Goodbye music would be too sad, today it’s just party music!”

And he, indeed, kept his word and made the crowd dancing as if it was to be the last evening (what it actually was, but who knows…). For Daniel, this semester was a also huge success for his career as DJ, “when I came here in august, I never expected to perform as DJ at all, and now I played three times just in the last two weeks. That’s simply incredible!”

One of the last songs he played this night, Zara Larsson’s “Never forget you”, definitely also applies to the friendships and experiences made during this last semester. And who knows, maybe the one or the other will come back as degree student to HiMolde.