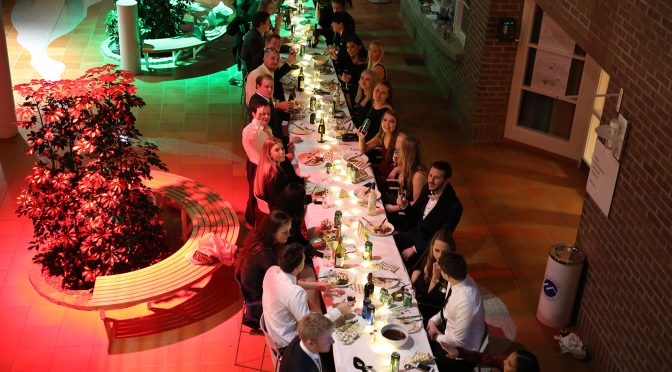 Last Friday, more than 200 students gathered at HiMolde University for the New Year’s Banquet and for the after party with a special presentation from local band Lærlingan and former Molde student Daniel Schempp.

Everyone that attend the event were well dressed to celebrate the new year. Students started to arrive around 18h45, and the banquet started around 20h right after rektor Steinar Kristoffersen’s speech. Tasty food was served with vegetarian options, and for dessert brownies and ice cream.

Lærlingan played for an hour and put everyone on the dance floor to dance. Everybody likes SiMolde’s student environment coordinator Rolf Magnus Orø – who is the leader of Lærlingan, so it was nice to see him performing with his band and having fun. After the band had played. our great friend and awesome DJ, Daniel Schempp, was the responsible for the music and played till the end of the event.

Alcohol and soft drinks were not available for purchase, so people were allowed to bring their own drinks. However, due to alcohol law in Norway regarding young adults, drinks over 22% were forbidden. The organization hired security for the event. The security was checking the entrance and walking around the event to keep order in the house.

See the photo album from the event on Facebook.

I didn’t see any problems at the event or problems with alcohol. Most of the people were having fun and celebrating the new year with new and old friends.

The event was a good opportunity for the new Erasmus students know more people and for all students having fun with good music and nice food.

This Friday the second open mic will happen at Smuget, and I hope to see everyone there singing, dancing, and showing their skills.