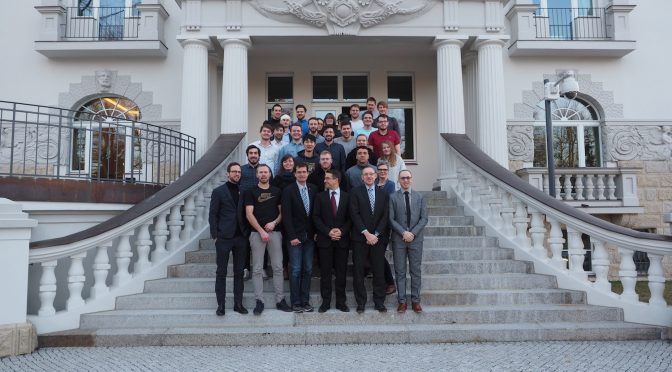 Visiting The Arabic Cultural House was a unique experience for all the students. Photo: Aneta Grabmüllerova

Just after an arrival to Mainz and brief introduction at University of Mainz, the students visited the Opel Arena, the home of the local football club Mainz. The group had an opportunity not only to see the stadium, but also explore the VIP lounges and locker rooms of the players. Part of the excursion was also a presentation about security of venues given by the Head of Security, Dominique Groß. Evenings always belonged to exploration of the buzz of metropolis, which Mainz and Frankfurt comparing to Molde surely are, and experiencing German cuisine.

The following day were spent in Mainz at Johannes Gutenberg University, where Prof. Dr. Holger Preuss gave several lectures related to the International Olympic Committee and it’s new approach towards hosting Mega Sports Events. Another point of view on IOC activities were offered by sports journalist Holger Küher, an expert on international sport politics. Students also had the chance to visit Carnival Museum and get some insight on organizing non-sport events.

On Friday 16th of March, the lectures were held at DOSB (Deutscher Olympischer Sportbund, German Olympic Sports Confederation). The students had an opportunity to get a better understanding on German Olympic strategy.

Isabel Flory from the German Olympic Academy shared her experience from organizing the Olympic Youth Camp in Pyeongchang in 2018, and Florian Frank talked about marketing of Sport driven by Olympic Games in Germany. Part of the program was also a workshop where students were supposed to prepare several scenarios related to the future of the Olympic Games. After a long busy day, there was still a guided tour of Stadium Tour Commerzbank Arena held by its manager Frederik Gehrke.

The following weekend was a bit more relaxed in pace. HiMolde students, together with German JGU students, took a 10 hour long bus ride to the capital of Germany, Berlin, with a short stopover at the University of Leipzig. Sunday, it was time to explore the city and learn more about the wall that had been dividing Berlin to the east and west parts during the time of cold war.

Later in the day, students got a unique opportunity to visit the Arabic Culture house of Qatar. Qatar is one of the richest and fastest developing countries in the world, and a controversial host of the 2022 FIFA World Cup and candidate for 2032 Olympic Games.

During the following days in Berlin, students of Molde visited German Bundestag and the Paul-Löbe-Haus and received guided tour by Dr. Karsten Liese, Referent CDU/CSU Fraction. Another long day was finished at ice hockey Mercedes Arena, where two presentations were given by Ole Hertel, Deputy General Manager of the operation agency of the Arena and Thomas Bothstede, the Director of Business Operation at the home of ice hockey club Eisbären Berlin.

Last day in Berlin started with lectures related to the development of less popular sports in Germany, such as American football, and the importance of fan clubs given by Prof. Gerald Fritz.

In the afternoon, students visited the Olympic Stadium in Berlin, which hosted the Olympic Games in 1936, also known as the Nazi Games, and was renovated to host FIFA world cup in 2006.

The guided tour offered interesting insight on the history of the stadium and the nowadays multipurpose use of it. Students also visited the Football Academy of home club Herta BSC Berlin and learned about its operation and marketing.

After the eventful week, an easy day on the bus going back to Mainz was welcomed. On the half way, a last presentation and guided tour was given in Oberhof, the traditional venue of biathlon world cup.

It was a nice change to be back in snowy, Molde-like surroundings after a week in the city jungle. Students had an exclusive chance to experience what biathlon is really like and take part in a small shooting competition.

Yngve Malkenes made all Norwegian students proud, when he took the win. The next several hours of bus ride offered time to provide a feedback and evaluation of the trip.

Special thanks belong to Prof. Dr. Holger Preuss and Prof. Gerald Fritz who organized this incredible trip, and fellow German students who were very helpful throughout the week and made it a great experience.