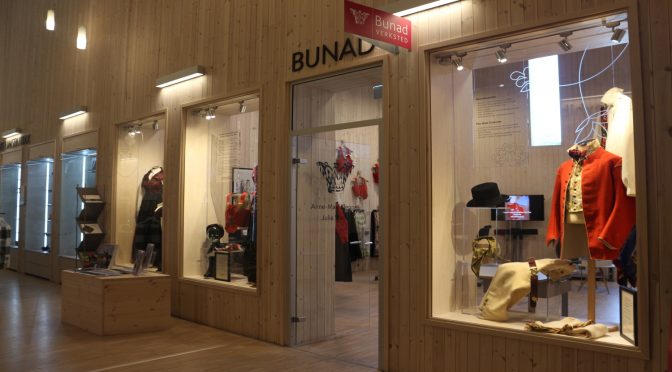 17th of March, Romsdalmuseet in Molde celebrated the opening of Bunad Verksted with support of international Artisans at Work/Économusée network.

Bunad Verksted (or the workshop on tailoring the Norwegian folk costumes – bunad) is a part of international Craft Reach project which is intended to develop and promote traditional local craft businesses at visitor destinations through the international Artisans at Work/Économusée network.

The Économusée started the concept of keeping local craft businesses alive 25 years ago in Canada. Nowadays, it is a large international network of more than 100 participating locations in Europe and Canada. Économusée helps local communities to keep historical and cultural craft skills alive through creating workshops where visitors can see the craft in action.

Recently formed association, Artisans at Work Économusée in Norway, Møre og Romsdal county and EU Interreg programme sponsored the opening of Bunad Verksted at Romsdalmuseet. Know how to process wool or embroider and sew by hand a national Norwegian costume – now visitors can watch and experience all this at Romsdalmuseet and it’s Bunad Verksted.

Working with folk costumes since 1928, Romsdalmuseet recreated historical garments and replicated costumes with local connections. After the Second World War, there was a renewed interest in national costumes and Romsdalmuseet was not only sewing bunad, but also did a great research in this subject.

In old times, silk and cotton were mainly imported to Norway from India and only rich people could wear it. That is why artisans passed the embroidered textile through the press to imitate silk.  The main bride’s attribute, bridal crown, could be borrowed from rich people or the church. Another bridal element, bridal bib, was usually decorated with jewelry and a mirror. According to the legends, the mirror intended to exorcise the spirits.

Nowadays, Romsdalmuseet produces several versions of women’s and men’s bunad. The female costume is generally made of woolen vests and skirts, linen blouses and cotton aprons. The Romsdal female vests are all red – the symbolic color of ‘life’. The male costume of Romsdal consists of red jacket, fashioned in old European military style, moose leather trousers and embroidered silk vest.

For all comers, Bunad Verksted at Romsdalmuseet offers a readymade bunad (prices are from 35000 kroner), «gjør-det-selv-pakke» (or to assemble the costume yourself) and bunad repairing services. Bunad Verskted also cooperates with famous textile supplier Krivi Vev and silver jewelry producer Sylvsmidja.