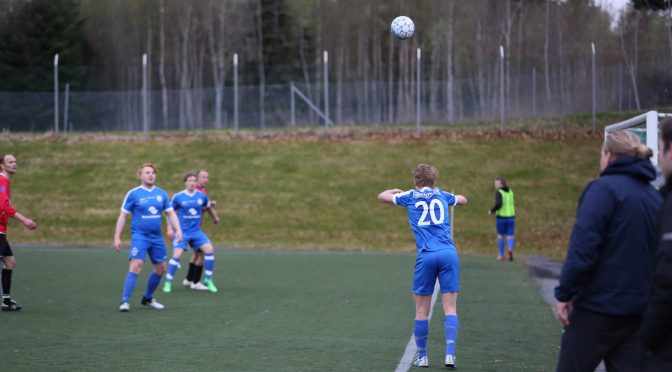 MSFK throwing themselves into the second match of the season. Photo: Benjamin Moeyersons

Moldestudentenes Fotballklubb continues on the winning ways: After a superior 7-1 victory last week, the team defeated Isfjorden/Åndalsnes 2 by 3-0.

The spectators at MSFK’s home ground Lubbenes Kunstgressbanen had not even taken their places when the ball already crossed the goal line for the first time in this match against Isfjorden/Åndalsnes 2. It was defender Tobias Wingaard who made his team celebrating just two minutes after referee Bjørn Magne Myklebust had blown the starting whistle.

This goal seemed to be the wake-up call for Isfjorden/Åndalsnes, whom subsequently pressed for the equalizer and brought the defense of MSKF frequently into difficulties. But also MSFK had several chances for extending the lead, especially through a header in minute 10 which closely shot off target, and a long shot by Mads Kristiansen (15.).

Conversely, the team was quite lucky only one minute later, when a header from Isfjorden/Åndalsnes hit the goal post.

On the other side of the field, MSFK did better in putting the ball into the net: Jamie Sagstuen worked his way towards the goal area via the right flank and crossed to the left. where Mads Kristiansen did not give any chance to Gudmundur Pall Hreidarsson in the goal of Isforden/Åndalsnes – 2-0 (17.).

Only three minutes later, Mads even had the chance to score a second time; however, the angle was too acute and the ball missed the goal.

From there on, the match continued as toing and froing, with more or less even scoring chances for either team. Moldestudentenes FK once again appeared as rather ball-winning in the duels, but without capitalizing on it, neither by shooting from distance nor by headers – the ball simply did not find his way into the goal.

In minute 40, it was only the goalkeeper’s fingertips that averted the third goal for MSFK.

On the other side, shots from Isfjorden/Åndalsnes first only hit the goal post and immediately afterwards the crossbar. Therefore, the first half was finalized with the preliminary result of 2-0.

After the break, both teams changed their teams on several positions; for MSFK now also the two-time goal scorer from the first match, Marcus Jørgensen, entered the field.

Still, it was again Mads Kristiansen who created the first two real scoring chance in this second half, and that within a few seconds; however, in both situations it was the goalkeeper who was more successful. In the following, both teams tried to create scoring chances, but reached the end of the line latest at the opponent’s goalkeeper.

And so it lasted until minute 77, when Molde finally managed to make the game safe: Topscorer Marcus Jørgensen outplayed goalkeeper Hreidarsson and only had to send the ball into the net. Scoring three goals in two matches, Marcus is now also the leader in the division’s scoring charts.

After that, MSFK even had the chance to score a fourth goal; after Lars-Andreas Sigdestad outplayed the entire opposing defense, he passed to Sebastian Olafsen who only had to roll the ball into the empty net, but missed the ball. Only seconds later, the ball already seemed to be behind the goal line after a shot by Lars-Andreas Sigdestad again, but the goalkeeper managed to parry with a watchable flying save.

Finally, Isfjorden/Åndalsnes still got a chance to score when referee Myklebust awarded them with a penalty kick (89.). However, MSFK-goalkeeper Martin Jansrud guessed the corner and saved his team of getting a last-minute goal against. The fans at Lubbenes KGB gave him cheers with “Jansrud! Jansrud!” shouts.

Thus, the match ended 3-0 for MSFK; a victory, that then was deafeningly celebrated in the team’s locker room.

With six points after two matches, MSFK continues heading the table in their division.

The next match is scheduled for coming Thursday, 10th of May, against Fiksdal/Rekdal /Tomrefjord 2, again at Lubbenes KGB.