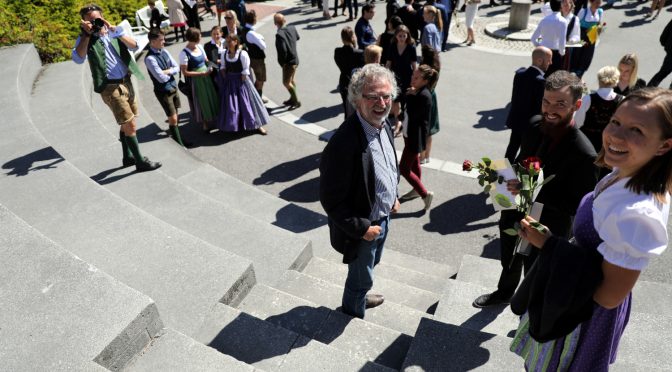 Janny Meese, director of the cultur department at Molde municipality and a HiMolde graduate, delivered the guest speech at Friday’s graduation ceremony, and told a story about how life in Norway has changed over the last 100 years.

Here is her speech:

«It is a great honour for me to be here with you all today – and congratulate you on the fact that you have reached an important academic goal, and for some of you, an important milestone on your further travel down the academic road to reach wisdom, and to seek profound knowledge.

This is a day for partying and for celebration – for you, for your parents, for your spouses, friends and family! And I do hope you will celebrate thoroughly! Because you deserve it and because you shall always seize the opportunity to be happy and have a good time – and to be proud of what you have accomplished!

For many of you these years as students have been just what you wanted them to be, the possibility to fulfill your plans and dreams even, to study the most interesting topics in the world!

But maybe for some of you, it has been a daily struggle from the day you started and till the very day you handed over your master theses! A struggle to fight off thoughts like: this is too boring to live through, or – there are so many things I’d rather do than staying indoors and read horribly long articles about stuff I hardly understand. And to you specially, I will say today – truly well done!

This is also a day to celebrate freedom of thought, freedom of speech and freedom of choice! Each and one of you graduates, and all of us, have the chance and freedom to make our own way, study and live our lives the way we choose to.

I would like to take this opportunity to remind us all, of the pure luck we have had – all of us, to be born in such a moment in time, in this short glimpse of eternity, in a time unlike any other in history, as we know it – and furthermore to be born in this small corner of the world – in this remote spot called Norway, for most of us at least, in this room.

Today, Norway is rich and prosperous with a welfare system not many other countries can compete with. If we go 100 years back in time, in Norway – when my grandparents were young, they experienced a totally different situation. In the beginning of the 19 hundreds, Norway was one of the poorest countries in the western hemisphere.  The possibilities we’ve had for some decades now, to follow our dreams in the sense that we can choose to study what we want, as long as we work hard enough, and be our own fortune-seekers and build ourselves a good life because we have free education, and a student funding system that allows everybody to study regardless of our parent’s economic status, sex or social belonging.

On a day like today, we need to remember and acknowledge the path of history that made it possible for you to freely choose to spend 5 years in higher education, free of charge.

And if one adds at least 3 or 4 more years of hard work, you may have a PhD in your pocket, like the 3 of you have got today. And we stand on the shoulders of those before us who have laid down stone by stone to build the society as we know it today.

To illustrate my point, I will tell you a story. In the year 1900 my grandmother was born on the island of Smøla. One hundred years ago she was 18, and about to get married and start the production of what was to be 9 children. One of them died of tuberculosis at the age of 2.

She and her husband, my grandfather, started out a project as young settlers in the peat bogs in the middle of the island, not regarded useful for anything else then for turf-production.

Turf – torv in Norwegian- was dried peat, used as firewood. And peat bogs are swampy areas where heather grows, but not much else. Ireland is known for their peat bogs, it provides the Irish with turf.

In the beginning of the 20-th century, remedies were seeked to prevent the emigration of people from Norway to America. A company was formed, called Ny jord, with the aim to prevent emigration and to secure what was called an inner colonialism through buying up unused land like moors and peatbogs, then drain and prepare the earth and make it possible for young settlers to move there and start their own farm, build their own house and make something for themselves in their homeland. In the years to come, this company had projects in many parts of Norway

In the thirties, this company bought up large areas of peat bogs on the island of Smøla. My grandparents had, at the time, 7 children, and started out on a journey that meant hard, hard work to try to make a living out of this harsh land. For a period my grandfather even lived in a primitive earth lodge, or cave if you wish, whilst working on the peat bogs, before they were able to build their own house. As the story goes he slept so heavily after a hard day’s work that he did not wake up even when the mice nibbled on his ears during the night.

In the end it turned out that the land they got from draining the bogs had no nutrition in it, and gave no crop. When they put a potato in the ground in the spring, it was still hardly more than one potato in the autumn. It was a desperate situation – years of hard labour and nothing came of it! This situation lead to the establishment of a research-farm on Smøla, with an academic approach to study how to solve the problems, and by different measures help finding a remedy. This research-farm became in due time, part of a University college for agricultural purposes. To make a long story short – the research-farm solved the problems, and some of the settlers stayed and survived, and the well-known carrots from the island of Smøla that you by in the shops today, are the result of the ambitions of the men who wanted to make this a better world and started out the project 120 years ago. It is also the result of the hard work of farmers like my grandparents, who wanted to make a better life for themselves and their families.

My mother was born I 1935. She went to school for the compulsory 7 years, but was hardly given time to do her homework, if she was needed to work on the farm. She grew up, got married, moved here and had 4 children, but she also had a dream, she wanted an education. In 1980, at the age of 45 she graduated as a nurse. This was only possible because Norway had prospered, the economy was blooming and the need of a qualified and educated work force was growing steadily. The school- and educational system had also developed to meet the new demands, and university colleges were established throughout the country for instance in remote places like Molde. Most families had for the first time, solid incomes, and good and affordable housing, despite the fact that most families had only one income. Women were housewives and housewives only, in this short span of time in history, only a couple of decades, actually. At the end of the era of housewives, in the seventies, the situation for women had taken a whole new direction, feminism was born.

The same year as my mother graduated from nursing school, I graduated from college – but unlike my mother and my grandmother – I could as a young woman follow my dreams and do whatever I wanted to do, like pursuing  exciting jobs. I got my education within television production and then a job in NRK. In Norway, television broadcasting was the same age as me – rather brand new in the eighties, in other words.

Then, 20 years and 3 children later, I could change the direction of my career in this now even more prosperous and well-developed country, fuelled by oil from the North Sea. Right here, in this rather small town where I now have lived for 25 years, I found that this excellent university college had an education that made it possible for me to stir up my cup of competence as it were, with a master’s degree that for one thing opened new career possibilities, but as important, gave me a glimpse into the exciting, academic world of knowledge and science. 5 years ago I was one of you sitting here in this auditorium.

100 years ago, that would not have been possible.

Do you see the time span of these 100 years lying between the year my grandmother was 18, and today, how it holds an enormous development – regarding living conditions, labour rights, human rights, education, birth control, health care and technological developments.

Remember, I actually had an uncle who died of tuberculosis when he was 2. It sounds like the middle ages, but was only 9 decades ago.

You and I – we were lucky enough to be born in the latter part of the 19 hundreds, in Norway, not in the 18 or 17 hundreds, in the slums of Oslo or London, or for that matter born as a slave in America. Thanks to the people who for so many years, fought for functioning democracies, social rights, female rights and not to forget free schools and education available for all people.

Remember, every now and then, this historic journey and your place in it, enjoy the luck of being born in the right end of these 100 years.

Please, watch over these precious values and through your future careers, your abilities and the wisdom you have found in your education here help bring our brave new world forward, so that it lasts for centuries to come. It needs you to take good care of it.

Have a fabulous day and a swell future  as well-educated citizens and contributors to our great society!»