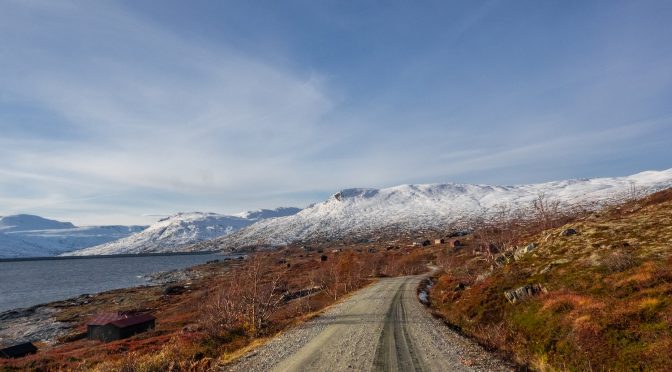 Møre og Romsdal is a region well known for several scenic roads: Trollstigen, the Atlantic road or the famous serpentines of Ørnesvingen road going down to Geiranger. However, only few have heard about Aursjøvegen. If you are up for a adventurous road trip, Aursjøvegen is a must.

Aursjøvegen is more than 100-kilometers long road connecting Eresfjord and small town Sunndalsøra. The road was built up in the fifties of the last century for construction traffic working on the Aura power station. Later, in 1967, the part connecting Aursjøen and Eikesdal was completed. For a long time before that, Eikesdal was reachable only by boat. The road was destroyed and re-opened more than 200 times!

Nowadays, more than half of the road is asphalted. However, it includes a 55-km long tolled section, and that is where the real adventure starts.

Approaching the tolled section of Aursjøvegen from Molde, you have to drive towards Eidsvåg and Eresfjord. That is where the original Aursjøvegen starts. You can enjoy the beautiful scenery of Eikesdalsvatnet and during the summer make a stop at Mardalsfossen – the Europe’s highest waterfall. The falls are nowadays developed for hydroelectric power and can be viewed only in the period from 20th of June till 20th of August.

Continuing trough the valley, you reach a toll station. This part of the road is open only from the 1st of June and closes when the first snow falls in the autumn. Currently, the road is still open, however it is not possible to drive through, as there are sections with tongues of snow up to 30 cm in height.

Immediately as you pass the toll station, the asphalt disappears and you start to ascend steeply on the rugged road with some 180-degree hairpin turns. You pass trough several craggy tunnels on the way up to Finnsetlia, which is more than 800 meters above the sea. Driving around snow-covered mountains on one side and hundreds of meters of cliff below you on the other side is breathtaking.

Once you reach Aursjøen dam, there are several beautiful hiking trails around. If you decide to stay overnight, you can stay in cozy DNT cabin called Aursjøhytta. The area is also suited for fishing or canoeing. If you decide to continue the journey, you will find yourself driving trough magnificent, raw landscape. The autumn colors with snowy mountains peaks are astounding.

After several kilometers before you start descending towards Sunndalsøra, you can see the Aura Power Plant station, which was the main reason for building up this nowadays scenic route. Before you reach Litldalen valley, be ready for some more serpentines and stunning views.

Important to know: the tolled road is about 50-km long, however it is mostly gravel road and you won’t be driving more than 40 km/hour. It is strongly recommended to have crossover or SUV car. The road is not recommended for caravans, and buses are forbidden. There are several blind spots, where a car coming in the opposite direction can appear suddenly. Winter tires are absolutely necessary this time of the year, chains or snow tires (with spikes) are well recommended. In case of heavy rain, there is a risk of landslides. The toll is 100 NOK for a car.

Currently, the Aursjø is reachable from the Sunndalsøra – Eikesdal direction, in the opposite direction; there are snow tongues over the road (7th October 2018).