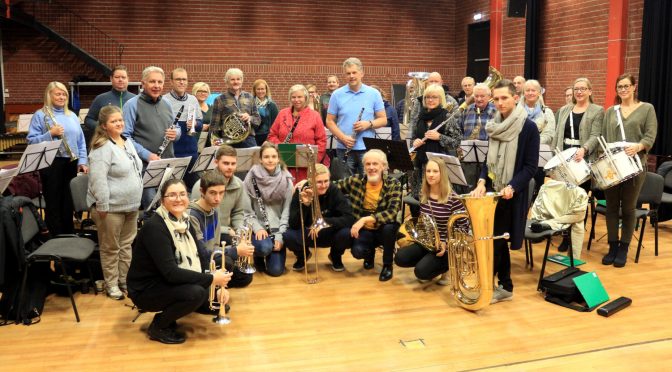 If attending a practice session is a good way of getting a taste of a group’s collective spirit, then witnessing a rehearsal of Molde Janitsjar, a local orchestra of the small town, will surely leave a good first impression on you.

During one of their weekly gathering, taking place at Gamle Kulturhuset, several members opened up about their experience and invited other people to join the band.

The first thing one can notice when attending a performance of the orchestra is how diverse of a group it is. From students to retirees, all gender and ages are represented and this surely must constitute a strength within the group. Even the songs that they perform show a large area of diversity. National compositions such as Gammel Jegermarsj, also know as The Old Hunting March, Jeger’n or the local favourite Her kommer Molde are accompanied by some of Don Gillis or Philip Sparke’s creations.

A large choice that could motivate anyone to join the band and which is also strongly encouraged by Molde Janitsjar’s members, as the orchestra is looking for new recruits to be part of the squad.

Sølve Mikal Krekvik Nerland, a researcher at Møreforsking who came back to Molde after twenty years in Oslo, explained that all people are welcome to join as long as they have some kind of experience with an instrument and he emphasized a particular area which might benefit from external sources: “Anyone can join the orchestra, we welcome everyone. You just need to be comfortable with the instrument. We are particularly looking for people who could play woodwind instruments, clarinet, flute, saxophone, we are encouraging people to join.”

He continued by saying that there is no need to engage in the long-term, a practical element that might convince international students and Norwegian students of the University of Molde as well as other students from the region to give it a try, as some of them might want to pursue their passion outside of their hometown: “You don’t have to commit for more than a year, you can simply join for one concert if you prefer. […] Our next representation will be in February, so people can join. And you don’t have to own your own instrument as you can borrow one from the orchestra.”

One that has surely understood and made the best out of this element is trumpet-player and new student at the University of Molde, Kristian Velle, who left his small town in the south of Møre of Romsdal this summer in order to pursue his studies: “I arrived in Molde in August because I am from Ørsta, three hours away from Molde. I am now studying economy and administration at the University, and It is my first year. […] It was important for me because I have been playing for 11 years in Ørsta. I stopped for a year during my military service so it is good to play again. I think that it is important socially as well.”

Being one of the two students currently playing in the band, his acknowledgement of the social aspect related to being part of the orchestra was also shared by other members who agreed on the fact that It was one of the main reasons why someone might want to join: “There are two reasons why you want to join the orchestra. The first one is because of the instrument, because you have this passion, and the second one is for the social part. It is a good way to get contacts and see people.”

It might therefore be a great opportunity to not only pursue one’s musical passion, but also embrace an entire culture as others approved the element of national identity that could be linked with the band. Asked about a similar question, Sølve Mikal Krekvik Nerland could only compare this aspect to the band culture in the United States: “Yes, it’s a kind of tradition in Norway, especially children, aged ten to eighteen, even sometimes younger, they get involved in such activities at a young age.”

Having recently performed in front of five hundred people in Oslo for the Always Elvis concert in the capital of Norway, Molde Janitsjar is presently composed of approximately sixty people, most of them are part of the orchestra which has its rehearsals on Wednesdays, each week from 6:45PM to 10PM. The other important part of it is made of the Signal corps, a group of seventeen ladies and their instructor that you can’t miss during outdoor representations. They have their rehearsal sessions on Tuesdays, at Lamgmyra skole in Molde, and are also open to new members.

Both present during the orchestra’s weekly meeting on November 14th, Signal corps members Kjersti Harnes and Bjørg Indbjør shared the characteristics of the group that they are a part of and which constitutes an important aspect of Molde Janitsjar: “We perform outside during special events, like the 17th of May. As the signal corps we are the marching band in front. […] We are 18 altogether and some people have played for more than ten years. This year, we have had four or five new members and it feels like we have a nice atmosphere in the group”, explained Bjørg Indbjør.

Being a part of the band for approximately one and a half year, and as she and Kjersti Harnes had brought their drum in order to take some pictures, it became apparent that they enjoy their time within this specific unit of the group, as Bjørg Indbjør continued: “I think that we have a really good atmosphere. Sometimes, it is even difficult to instruct us because we are talking and laughing so much, but there is surely a great atmosphere within the band.”

Also present during that evening, Heidi Spilling, who joined the Signal corps not long ago, could not agree more about the positive experience that it represents: “I joined the Signal corps between one or two months ago. I used to play for many years when I was young and I have some good memories about it. So, when some friends asked me if I wanted to join, it seemed like a good opportunity as they looked like a nice group.”

When asked if she was a local from Molde, she shared some interesting insights about the social aspect related to the band: “I am from Molde, yes, so it’s also a nice way to see other people and because it is a small town, everyone knows each other more or less so it is a good way to keep contacts.” Despite her need for adaptation as at first “it was a lot of things to take in”, she is confident about getting more and more comfortable through time and has already identified a symbolic date for her first performance within the Signal corps:  “The main goal is the 17th of May.”

If many people in the streets of Molde will make sure that Heidi manages to achieve her objective on  the national day, nothing prevents other people to join and experience a cultural and social part of Norway from the inside. As members of the orchestra have made clear, anyone interested about joining would receive a warm welcome.