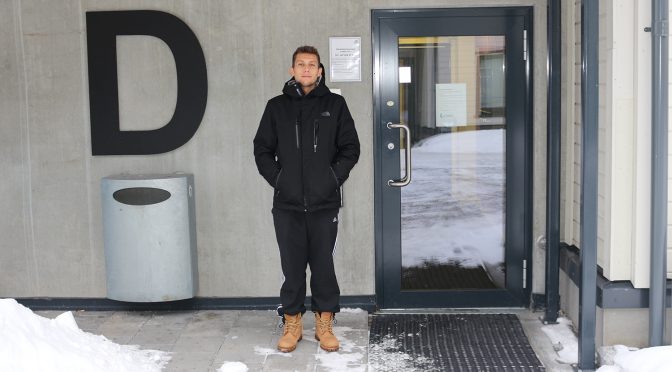 We met four of the new Erasmus students on Molde campus.

Several new international students decided to start the year abroad – in Molde – by joining the Erasmus program which allows them to join a foreign university and discover a different academic experience than the one they are used to at home.

Among them, Luca Mercurio, a 23 years old student from Bergamo, Italy, decided to spend a semester in Molde, Norway, and add a different perspective to his studies in logistics: “I am from Bergamo, which is in the north of Italy, and I came here for one semester as an exchange student from my university in Italy”. A few months in Norway within a new institution that should allow him to learn different skills and hopefully for him, turn out to be as useful in the long run as his first impressions suggest : “During my time here, I will have classes in Norwegian, logistics and a seminar on innovation also. So far, the program is interesting, especially the Norwegian course which is really funny.” The first encounter that we had with Luca did not focus solely on the curriculum for too long however, as the Italian student went on to speak about a first challenge that, as a newly arrived international, he had to face : “I went to the supermarkets to get some food but I did not manage to find any good meat, yet, but tonight I will try some salmon for the first time here and see how it goes.”

Met again a week later after his weekly Norwegian class, Luca didn’t give much detail about the outcome of the salmon degustation he had planned the previous week but he was able to already establish some kind of summary of his experience in Norway, two weeks after his arrival : “Well, what I can say is that, here, I like the mountains, the snow and the fact that we can easily go hiking. What I don’t like are the prices and the public transportation system”. When asked to develop his point regarding the latter, and adding to the cost factor that he estimates to be high, he said that : “It doesn’t really allow us to go around easily and see things around Molde.”

Quim Aguado also shared some of Luca’s feelings in regard to the cost of life in the Scandinavian country. As a twenty-one years old student from the Barcelona Supercomputing Center, the Spanish who freshly arrived from Catalonia was initially interested about the opportunity to go on a trip to Tromsø with some other Erasmus students, but he finally decided not to join : “I am not going because it is too expensive for a few days. It’s a great opportunity though, but as a student you have to make choices and I decided not to go”. Luca also had to re-evaluate his plans of joining on this trip due to scheduled courses at the same period. They will nonetheless try to visit some places in Norway when their schedule will allow it.

Having a similar interest in regard to discovering the landscapes of Norway and emerging themselves in a culture that has always interested them, Eva Scheidt and Stephane Berne, two twenty years old French students from Grenoble who arrived in mid-January, made sure to secure the transportation part quickly after their arrival in Molde, as Eva explained : “We took the monthly pass to be able to take the bus and really see the region as it is our first time here. And the fact that ferry trips are included is a nice opportunity to experience something different”

Her studies in accounting being compatible with the opportunity to join another university abroad and likewise for Stephane’s information system management program, they both decided, with a third student from the management school Grenoble IAE, to come to Norway and add a Scandinavian taste to their academic path.  A choice which seems to be the right one according to Stephane’s first thoughts on Molde University College, a week after the beginning of his semester : “The fact that all of the courses are available online is a concept that I really like. And even if for the Norwegian course that we follow, it is a bit difficult at the moment, because we arrived late and missed the first classes, it looks promising”.

On top of this part, Eva has already been able to appreciate the singularity of the small Norwegian town : “When the weather is favourable, it truly is amazing to see the landscapes and the environment here. For us, it isn’t really that much of a change to see all that snow right now, as we are used to it, but it looks really nice”. Stephane also agreed about snow not being that much of a change for them, but he was still slightly surprised to see as much as there is in an environment like Molde’s : “Compared to Grenoble and what we usually experience, it is crazy to see the snow here almost at the level of the sea”.

This environment factor having played an important part of their decision to leave their hometown, the two students will make sure to make the most out of their time in Norway, as Stephane already has talked to a fellow-student in his class regarding the possibilities of skiing in the region : “He told me that I could possibly find some second-hand skis on the Internet for around NOK 1000, so that could be really nice, especially to experience cross-country skiing here”. On top of that, they will also be looking forward to the start of the Eliteserien season at the end of March, as both are football fans and would really enjoy witnessing Molde FK in action.

More than it being only about experiencing the beauty of Norway during their stay, they are also particularly curious about emerging themselves in the local culture. In this regard, their first impression of the Norwegian students that they have encountered during their first week in Molde has not really felt like the warmest type of welcome possible, but they were expecting it, like Eva explained : “So far, they seem very shy, very closed up and we haven’t really had the opportunity to talk, as they sometimes don’t even respond when we say ‘hello’. So, it can seem like they are very cold, but we had been warned about this in France and I am sure that after a while they will be more open and there won’t be any problem”.

However, a problem that might play a more important role in their Norwegian experience concerns food and drinks, as they have already been able to see that prices were higher than in France : “We went to the store where we can purchase alcohol in the city-centre and we bought a bottle of white wine for around NOK 120 and it was one of the cheapest” explained Eva. “We looked at other bottles, and vodka for example, was much more expensive than in France” added Stephane. After learning that alcohol was a great way to break the ice with the locals, they might have felt that it would not be such an easy thing. Nevertheless, the two French students ended the discussion by proving that it will require bigger challenges for them to be scared away during their time here.

Being resourceful, they have already thought about ways to avoid spending too much on food, as Eva highlighted : “I think that from now on, I will make everything myself. Instead of buying cookies, I will bake them, if I need to make pizzas also, I could do it, even though it is one thing that doesn’t seem to be too expensive here. And since what we have tried so far was not very flavourful, I should really do this”. Stephane even went further, suggesting that dumpster-diving could be an option since he has heard that it was quite common, especially for students to use this practice in Norway.