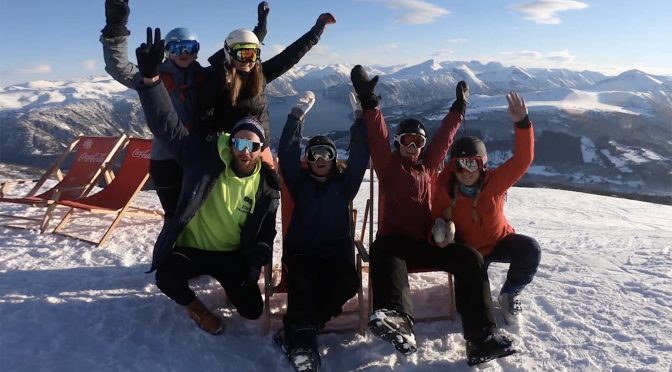 Skiing in Stranda. Screenshot from the Vinteruka 2019 video

Good planning, communication at all levels in addition to regulations and active involvement of group leaders was the key to success for the 2019 edition of Vinteruka at Høgskolen i Molde, according to student Guro Iveland, leader of the project.

For those who are new in the “City of Roses”, Vinteruka is a winter event by and for students at Molde University College aiming to create involvement around winter activities in areas nearby with a focus on a healthy and active student environment.

This year, the “Winter Week” started on Monday 28th of January with a Randonee trip and an Opening party and Bingo alongside with iFri, followed by different ski activities within the Møre og Romsdal region, and a closure on Sunday 1st of February at at the magnificent landscape of Stranda municipality.

“We wanted to do something for the community of Molde before we leave” said student Martine Skistad Skagseth, board member of Vinteruka.

In 2018, and for the first time, Vinteruka was moved from Oppdal to Molde, as a way to “increase student’s participation” according to the official statement of the organizers. However, the delay on setting the full program led Vinteruka’s board members to re-arrange some typical activities, which resulted on a low student’s participation. Also, due to lack of people who would arrange the trip, the traditional ski visit to Skaret was suspended on that year.

RELATED: What happened to Vinteruka?

For Guro and Martine, organization and a keen eye for detail are the foundations for the success of any project. Using their background as master students in logistics and their passion for planning and organizing, the whole team was commited on the development of a detailed program and a constant follow up of all the activities since the beginning of the project.

Part of the legacy from this year relies on the development of a report for those who will take over of the event in the next few years, where they will be able to see what was done and how was done it, in order to make the proper adjustment for future editions.

Even if there are no official records in terms of participation so far, some of the students interviewed from Panorama, and who were able to assist to Vinteruka in 2018 as well as in 2019, ranked the activity as a positive experience in comparison with the previous season.