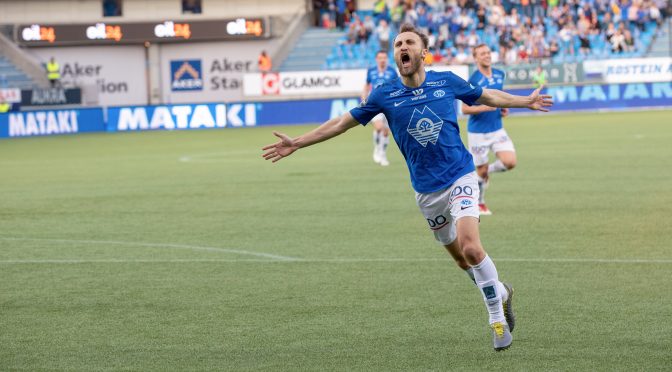 A strong organizational preparation and a dominant performance on the field resulted in a successful event for Molde Fotballklubb against national rival Rosenborg BK.

All the ingredients were gathered for a pleasant evening of football when Magnus Wolff Eikrem kicked off – at 8 pm Sunday night – the beginning of the game between Molde FK and its biggest rival in the Norwegian Eliteserien, Rosenborg BK.

Despite a difficult start of the season for the away team, only accounting two points after the initial four games, the opposition between two of the best teams in Norway was highly expected and a large crowd decided to show up at Aker stadium in order to fully enjoy the event.

In regard to the latter, a lot of work and preparation, very often an invisible part of most events, is required to properly manage such an important concentration of people in a single venue and offer the best possible experience to those who made the decision to get as close as possible to the action.

Three hours before kick-off, this element was already on display in the small town center of Molde. Police and security officers were controlling the area around the stadium and making sure that any sort of risk would be handled effectively and properly in order to maintain the positive state of the sporting manifestation.

The ideal weather conditions surrounding the event were another element affecting the risk of hazard to occur as the streets were filled with a lot more people than on a usual Sunday and most restaurants saw their terraces being stormed by fans from both teams looking for a beer or even an early dinner in order to fully appreciate the match later on.

This aspect highlights the potential that such event offers to a local economy, creating a unique atmosphere for friendly gatherings and the usual consumption pattern that is associated with it. Bars, restaurants and hotels therefore also closely follow MFK´s home schedule in order to not avoid the business opportunities that can potentially greatly impact their revenue.

Molde Fjordstuer, the hotel with the closest location to Aker Stadion, decided to take full advantage of this rare opportunity by opening its outdoor restaurant to customers for the entire period leading to the football game and witnessing a rise in bookings due to the arrival of away fans from Trondheim, where Rosenborg plays half of its games during the season, at Lerkendal stadium.

Despite the team’s current bad form, a significant number of fans decided to make the journey from Trondheim, although previous years were even more important in terms of away team attendance as the MFK-RBK game would often be a clash between the league’s top teams, adding to the intrinsic rivalry that animates both sides.

All of these topics were expressed by the executive staff of Molde FK in front of the master’s students in Sport Management from the local university when they visited the stadium for a formal tour held four days prior to the biggest match of the season.

As part of Birnir Egilsson’s Event Organization course, this collaboration between the professional football club and the Sport Management department of the university offered a unique opportunity for students to get immerged in a real-life case of professional event organization.

They, for example, got introduced to the behind the scenes of TV broadcasting during a professional football game, a crucial part of the industry nowadays, by having a look at the media platform which is located at the very top of Aker stadiun. The club executives explained that fifteen cameras were operating during matchdays and they offered a look inside the NEP media truck to students just before the game against Rosenborg.

Another crucial aspect of MFK’s matchday organization that students managed to witness concerned its relationship with its «Stadions Venner», the group of more than 350 volunteers involved at the stadium on a regular basis and which constitutes a vital component of the club’s fan experience offering, having strongly helped MFK win the “Best match-day organization” award last season.

On top of this, some of the volunteers have been committed in their role at the club for more than 20 seasons, a unique example at the professional level in European football.

All of these elements, the human resources, technical aspects and risk management components are part of a complex process of cooperation and inter-relatedness between actors which leads to an overall product offering affecting the value of the consumer experience.

So, when the referee gave the three final blows of a superior performance from the home team, validating a 3-0 victory over its biggest rival, it signaled not only the end of a 90-minutes long football match but also highlighted the work done during several weeks by the home organization and how the co-creation of a much broader product can have an impact at the regional level.