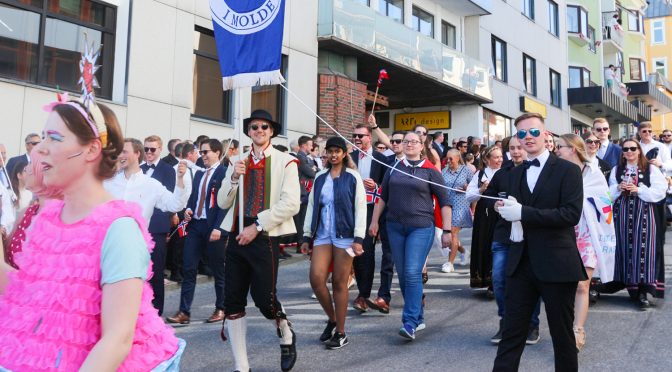 HiMolde marching in the citizens parade during the celebration of May 17th in Molde 2019. Photo: Zelda Nyangari

In the morning, the children parade is one not to miss on the national day celebration in Molde, with the little ones dressed in their costumes, singing and shouting their school slogans.

The 17th of May parade was led by marching bands walking through the town centre up to the Reknes park, where everyone queued for ice cream. The morning parade for the children was quite exciting, parents had filled the streets from as early as 9 a.m., and from 10 a.m. the march commenced, starting with the kindergartens.

Watch more photos from the celebration on our Facebook page.

In Molde this is one of the festive moments where you get to see majority of the population in one place, you might even wonder if these people are from Molde, because on a normal day the streets are quiet and with few people minding their own business. Men, women and children of Molde showcased their bunads, and if you did not have one, this was a great opportunity to wear that elegant outfit. The russ where also up and about, with their red jumpers making them stand out from the crowd.

We also witnessed our very own kindergarten Anestua marching and Kvam and Sellanrå school band marched gracefully in their marching band uniforms.