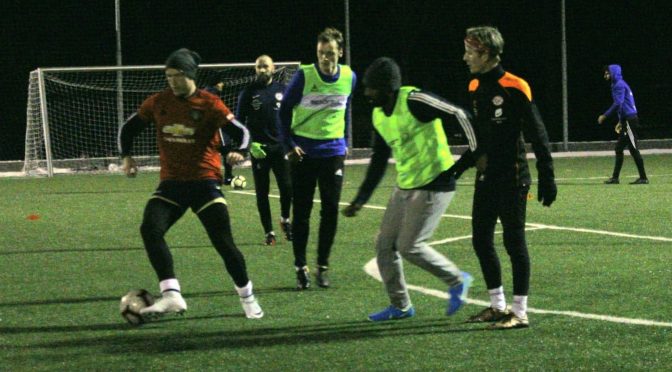 REKNESBANEN (Panorama): Yesterday, the Molde student’s football club MSI offered all the students the chance to play football, show their skills and compete for positions on the this season’s team.

Last night, a group of players from Molde University College arrived at Reknesbanen at 8:30 pm for the first training and selection match which will assist the squad’s development in the build up to this season for MSI, playing in the fifth division. This year, the seasons will start from April 25th.

The training session aimed in selecting the best players around Molde University College for the team and helping them continue their development and introduce them to the demand of football.

“It’s the first training we have officially with the team this season, and now we have to sit down, Jørgen Hveding and I, and decide who of the players are good enough for the team,” said Isak Tollerud, the main coach of MSI’s male football team.

Describing his expectation of the team for this season, Isak Tollerud said: “I think it will be hard for us this time, because we lost seven players from last year (Tobias Wingaard, Abdi Malin, Mads Kristiansen, Trym Malones, Marcus Jørgensen, Johannes Nystøyl and Espen Gussiås) and some of them were the best we had. It will be a tough season, and our goal is to stay in the fifth division.”

“This season, I cannot except the same performance as last year, as long, as we lost many good players, but we can still do well and win some games,” said Jørgen Hveding Andreassen, the leader of both student football teams.

The doors are still open for all students at Molde University College to join the MSI football teams.