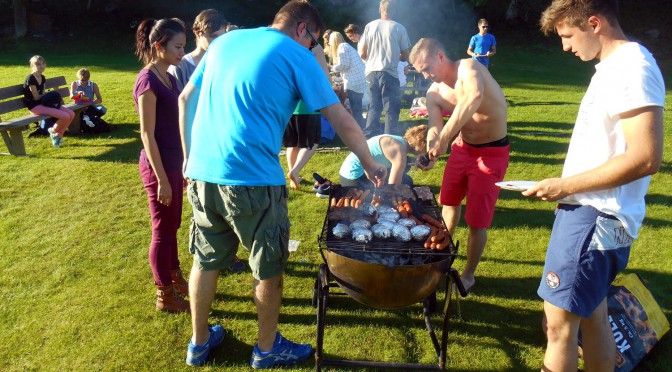 “From what I’ve seen during the opening week, the international students already are an extremely close-knit group,” assistant professor Geir Oterhals says.

Students following the MSc-programs in Sport Management and Event Management in Molde went on some exclusive excursions during the opening week this year.

They had a barbecue and the World Championship in Potato Slinging, kind of, on Hjertøya – an island – close to Molde, were given a tour of Aker Stadium and watched Molde FK’s win over neighbouring rival Aalesund FK, and also went on a hike to the top of Horja mountain on Skåla Peninsula.

“These students are telling me that they’re happy with how they have been received by faculty and staff inn Molde,” international coordinator Ragnhild Brakstad says. “They seem to be a nice group of students, and they all seem to be very motivated for their study programs.”

PhD candidate Birninr Egilsson and professor Harald Dolles were in charge of it all, but dean Oskar Solenes and assistant professor Geir Oterhals also went along on the excursions.