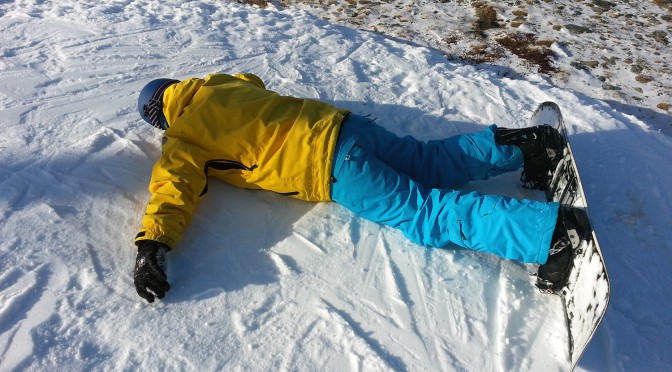 Partying and riding for the whole weekend comes with a price to pay, as our reporter Krystof Diatka tries to illsutrate here. Photo: Pavla Ujmiakova

Matt and Krys were on a quest to discover what Vinteruka, the skiing trip organized by students of Himolde, was actually about.The trip took place from 12.2 to 15.2 in the skiing resort Oppdal. Around 120 HiMolde students partook in Vinteruka.

Krys: «I think that Norway is a very unique nation, but like any other, they like to party hard. Interestingly enough, to truly bring out the party animals in them, they need snow all around, mountains, and for some reason a volleyball pitch halfway up the slope. What do you think, Matt?»

Matt: «I expected a lot of parties on this trip, but that was not true. There was only one party; it began Thursday when boarding the bus, and did not end until Sunday. Many people maintained inebriation for the entire Vinteruka, and I proudly count myself among them. I find it interesting that in a country with such strict alcohol laws, opening a beer for breakfast was pretty much an obligation.»

Krys: «Yeah! One could observe the party progress by the amount of empty beer cans dumped under the main skiing lift by folk who are normally so environmentally friendly. Considering how forbidden this act is, the staff deserves a shoutout for cleaning up after partiers rather than hunting them down and prosecuting them.»

Matt: «Speaking of breaking the rules, do you remember the police appearing?»

Krys: «I did notice them there. What was that all about?»

Matt: «At an afterski party, one of the Vinteruka participants found himself in a disagreement with the owner of the facilities. After some escalation, fists were flying. One of said fists found its way into the owner’s face.»

Krys: «Where was the security for all of this?»

Matt: «Non-existent. I have never seen a Norwegian club without at least one guard until now. The lack of security also explains the naked guy on the balcony of the afterski club.»

Other than the countless scrapes and bruises, and the death of many brain cells, the Vinteruka partakers all managed to get home in one piece.

Krys: «Except one! Marius Ullaland, my cabin mate, traded his skis for my snowboard as a dare. After some quick pointers from me, he had a successful streak that tempted him into going for fancy tricks. He quickly suffered a broken tailbone that left him butt-hurt for the rest of the trip.»

Without further ado, let’s congratulate cabin #6 for winning the Vinteruka Olympics. This series of competitions consisted of a quiz, snow volleyball, sledding and beer pong. The amount of drunk sportsmanship involved in all those disciplines was just spectacular.

Seriously though, we owe some credit to the organizers for somewhat controlling the chaos that is Vinteruka.