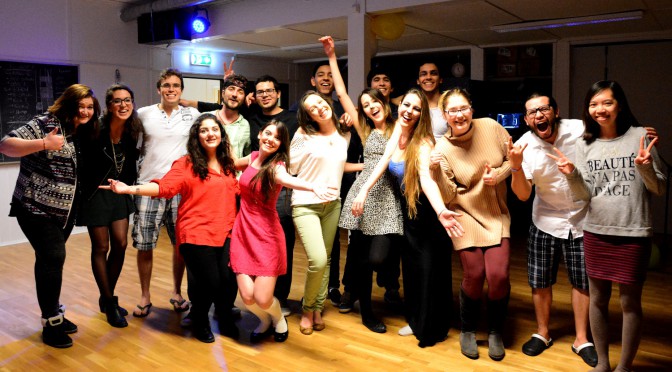 A couple of students and revellers met for a joyous moment at Molde Swing- og Rockeklubb on Saturday evening for the Latin Carnival event.

The event was organized by a few dance club officials and attracted a good number of students from South America and Spain who outnumbered the dance club members. It was a melting point of cultures as different nationalities and continents were represented. “We are happy that many students joined us today and hope that they will attend more of our future events,” said Hans Terje Møller, the dance club’s president.

On the same note, Erasmus student network’s (ESN) vice president Rodrigo Lara, was equally impressed by the event given that it targeted his culture. “We have a major task within ESN to organize events that target everyone given that most of us come from different countries. This was a good experience for us,” he said.

The University College’s newly formed band Camden Town band with members from South America performed a few English, Spanish and Portuguese songs that got the crowd on their feet dancing.  “We felt more relaxed today. We had practiced for a good amount of time and were not nervous,” said Tiago Salvador, one of the band’s member. “The most exciting bit was the fact that the crowd was happy and that made us happy,” added Wilson Garcia, band guitarist.

Camden Town band receives overwhelming support from friends, classmates and most importantly fellow country mates at any given event. “When we came to Norway and found ourselves all alone, we decided to form a tight knit family and support each other while here,” continued Salvador.

Given that carnivals are synonymous with partying, various engaging dances were performed such as Salsa Circle, Norwegian folk dance among many other dances that had nearly everyone present very entertained and happy. “It is nice to see people entertained and having fun, this shows that the event was a success,” said Christine Grob, who was one of the organisers.

A few people dressed in the most fabulous costumes won some awards, including Ricardo Kersul from the university college.