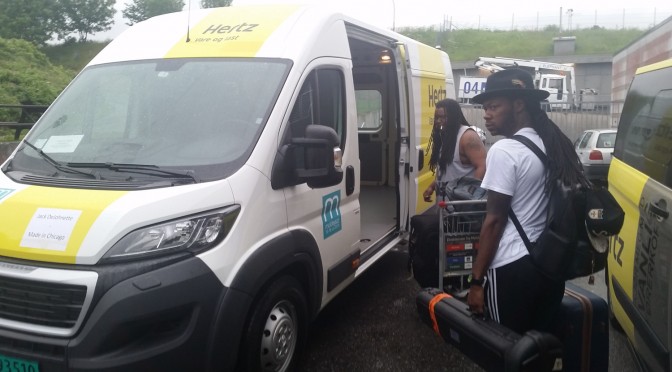 Members of the band Soul Rebels boarding the car at the airport. Photo Krystof Diatka

«The volunteers  are absolutely crucial for us. Without them we would not be able to offer so many free concerts and other events,» says the leader of Moldejazz, Hans-Olav Solli .

Moldejazz is a large festival. And as every event manager knows a happening of such  scale could not be sustainable unless volunteer work is brought into the picture. There are 650 volunteers working for the festival this year.

This week Panorama will publish several articles about people, events and places that makes Molde International Jazz Festival what it is and we are starting out with the people that drive the stars.

The fleet of 25 vans,  passenger cars and two limousines operated by 20 volunteers takes care of the logistics connected with the transportation of artists. Missing instruments, delayed flights or too many contrabasses for one plane to carry are only few problems they have to tackle on daily basis.

Kristoffer Gussiås Mittet, a truck driver from Molde, is one of the volunteer drivers who makes sure that Moldejazz celebrities make it into the spotlight on time. This is his fifth year volunteering.

«In the first place I joined because it seemed it could be an opportunity to get to know new people have some fun and meet some of the celebrities,» he says.

Driving the artists to their hotels and performances gives him and other drivers plenty of opportunities to do that. The ride to airport for Jack Dejohnette and Made in Chicago were only one of many he has to do every day of the festival.

The leader of Artist Transport is Svein Åge Johansen, who has been working for the festival for 32 years, claims that with artist transportation there are no problems, only challenges to meet.   And the challenges could get incredibly large indeed with celebrity names such as Carlos Santana, Joe Cocker, B.B. King and so on.

One of the larger issue they  had with the preparation  was when Bob Dylan came to Moldejazz. It took months of contact through email and phone with his management to set the conditions right and well in advance a security responsible came over to examine the situation and approve it for Bob Dylan.

Svein Åge Johansen enjoys the reputation of a local legend based on his encounter with Miles Davis after the legendary midnight concert during Moldejazz in 1984. After the show Miles Davis asked Svein, who drove him to the concert whether he liked his music, upon which Johansen promptly answered “nope”. Davis allegedly reacted with a simple answer: “ Let’s be friends.”

This story has been drafted into a theater play called Driving Miles.

The play is a regular part of festivals program for many years now. This blend of a one man show, comedy and a musical narrates the relationship between the driving instructor Svein and the jazz icon upon which Davis’ lifestory including his death is painted.

The performance itself has a pinch of the unexpected in it. The jazz concert of three musicians is suddenly broken by the one and only actors speech. The musicians later on serve as an accompanying band playing Davis related music.  The interaction between the band and the actor is fluent and underlines the undisputable narrative talent of Per Egil Aske, the actor which could be appreciated even by a non native speaker such as me.

The biggest logistical challenge for Artist transport crew this year is probably going to be with famous Robert Plant whose suite is going to count 25 people. Robert Plant could be considered to be one of the biggest start performing at Moldejazz 2015. But according to Sveins personal saying  there isn’t a biggest star every year they should get a special treatment to.

“The biggest star is the one you are driving right now.”