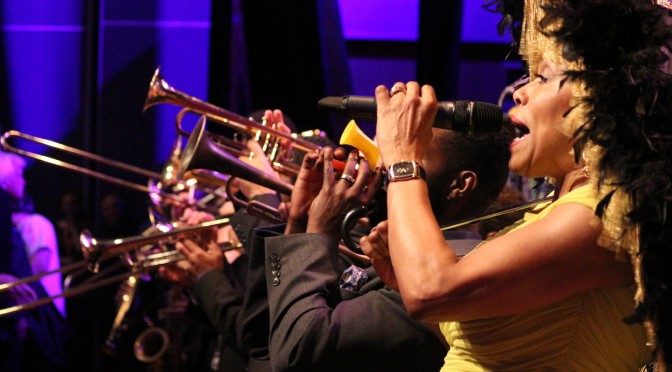 Dee Dee Bridgewater and The New Orleans Jazz Orchestra during their walk through the audience. Photo: Krystof Diatka

“During this song people in Norway tend to take their clothes off,” said Irvin Mayfield, the conductor and a trumpeter of New Orleans Jazz Orchestra, when he introduced a Mardi Gras celebration song. Fortunately no one in the audience really took their clothes off. Instead they got an uplifting and cheerful jazz show.

As the crowd awaited in anticipation of the arrival of the star of the evening, Dee Dee Bridgewater, it was soothed down by a first musical number by New Orleans Jazz Orchestra. Upon ending of the piece Irvin Mayfield announced the star as the best jazz singer in the world, the most beautiful lady in the world and also the sexiest.

”Wait till you see her golden shoes,” he added.

Even though all those titles are disputable, some more than the other, Dee Dee Bridgewater proved to the audience that her singing skills are truly world-class.

Her lively and full voice with incredible vocal range filled the Bjørnson hall in Seilet Hotel. And was able to bring the audience joy or nostalgia based on the atmosphere of the song. The piece called I Miss New Orleans brought tears in the eyes of couple audience members around me, even though I doubt any of them came from New Orleans.

Dee Dee Bridgewater with Irvin Mayfield showed certain talent for entertainment. The brakes between songs were filled with relaxed and playful acts.  Even though some were a little exaggerated, they were mostly amusing and  humorous. The reflection of Norwegian reticence during the “screaming exercise” in one of the brakes was for example well observed and spot on satire.

The accompanying New Orleans Jazz Orchestra did a great job of bringing New Orleans jazz style to Molde. Allthough, its accompanying role is questionable. Constant brilliant solos of various orchestra members, so inseparable from jazz music, promoted its role from playing the second fiddle to Dee Dee Bridgewater to another highlight of the evening. The performance of the trumpeter Leon Brown was especially outstanding. During the solos all musicians brought their instruments to their limits, which is expected at this level.  But Leon Brown brought it over its limits and the high-pitched notes were barely audible. A  true master of his craft.

The planned program was closed with a nostalgic tribute to a great jazzman, Louis Armstrong,  with his signature song What a Wonderful World. And during one of the encore numbers the lead singer initiated a surprising walk through the audience area with the whole orchestra following her, a great proof that Dee Dee Bridgewater during her whole career did not lose touch with her fans.