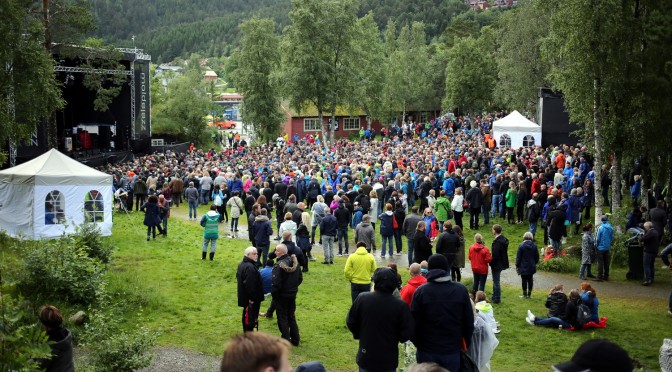 Walking towards the Romsdal Museum through Den Grønne Korridor park hearing the psychedelia of Robert Plant and The Sensational Space Shifters was something magical.

The Romsdal Museum is a skansen preserving traditional Norwegian architecture and culture. Wooden houses with grass roofing do not associate with the sound of an electric guitar and rock howling of a superstar Robert Plant. But it was this very combination which gave the experience such a special feeling. The well executed integration of the venues properties into the museums exposition gave an impression that concerts like this take place in there all the time. If only Molde was that lively.

It was the first concert I attended at Moldejazz that did not start on time. But a delay of just 15 minutes  with a star of such magnitude as Robert Plant is considered to be good manners.

» We brought the hammer of the gods to control the weather. And if you belive this, you would believe anything.»

Robert Plant opened his Thursday night show with a nonsense kind of joke. Nevertheless, the weather really improved majorly during the concert. A game changer for an outdoor event like this.

The soothing tunes of the songs of Robert plant and The Sensational Space Shifters lazily flowed over the green meadows of the Romsdal Museum creating a relaxing and mellow atmosphere. But perhaps too mellow. One might expect that a former lead singer of legendary Led Zeppelin would warm the crowd up to boiling point and beyond. One would be wrong in this case. The audience provided rather lukewarm reactions to music of one of the best voices in rock music.

The psychedelic tunes of The Sensational Space Shifters complemented the high-pitched  voice of Robert Plant which made Led Zepelin  what it was, a legend. And towards the end of the show the crowd finally started perceiving this combination as I did from the start and the atmosphere warmed up and during the encore the concert became a rock concert.

«We are not just jazz, we are also  bluegrass,» joked Robert Plant. Instead of laughter the crowd started cheering.» It was supposed to be funny, but fuck it! I love the sense of humor here,» reacted the singer with bravado ultimately proving that Moldejazz is not entirely about jazz, but that there also is space for great rock music and other genres.