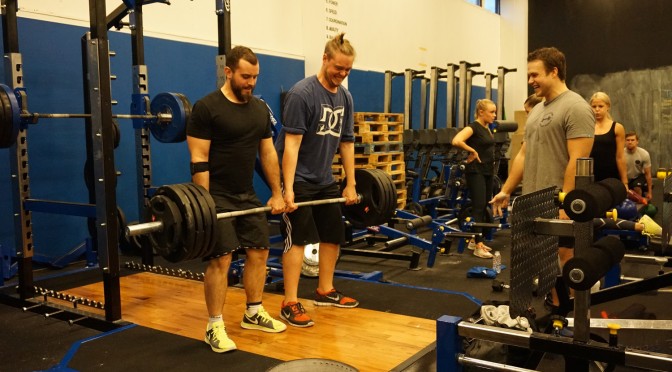 Campus chef Asgeir Hoel – in Panorama known as Norway’s strongest chef – can be proud of another achievement. He holds a champion title from equipped powerlifting at Arnold Classic Europe 2015 two weeks ago in Madrid.

This time we took a closer look at Asgeirs training routine, which I decided to undergo and conduct a little interview. Needles to say that even though I work out regularly – next to him, I felt like a little girl.

Bench press, squat and sead lift are the main elements of Asgeirs training.

«I train squat and bench press around five times a week, and dead lift three or four times,» he said.

From the point of view of us puny mortals, it is unimaginable to squeeze this  in a normal training week without destroying our pectorals, thigh muscles and lower back muscles, but for power lifters this is their daily bread.

I caught up with Asgeir two days into his new training program. His training consisted of:

– narrow grip variation of bench press with feet on the bench

«The last two exercises are there to strengthen up surrounding muscle groups. If one would train just dead lift, squat and bench press, they would risk getting hurt,» Asgeir explained.

The weights used in working sets are based on the percentage of the maximal weight the athlete could lift in given exercise. So for example, Asgeir started squatting first set with 60 % (145 kg), then he went up to 65% (157 kg), then 70% (169 kg) and the three working sets stopped at 72,5% which was six repetitions with 175 kg.

«I try to get my breakes to last maximally 150 seconds, but when people ask me about something – like nosy journalists such as you – I get distracted and they get longer. It happens a lot,» Asgeir laughed.

Asgeir competes in the equipped power lifting. That means that the athletes are allowed to use supporting equipment such as the compression suit.

«The compression suit stabilizes the body. It is made of really stiff multilayer combination of polyester and nylon. It is supposed to be extra tight and together with knee wraps it can help one lift extra 100 kg on squats for example,» elaborated Asgeir.

As the training carried on I felt devastated. Masculine pride drained by the fact that I could not lift some of Asgeirs warm-up weights left me contemplating my whole life. Where did it go wrong?

And just when I felt the lowest, Asgeir said:

«I am pretty sore from yesterdays training session.»

Then he proceeded to dead lift 215 kg and I died a little inside.

«I changed gyms because the Molde Performance Center is owned by a very open-minded person – Peter Haukås – who managed to create a great atmosphere in this gym. Also it is a lot closer to my home then Pro Gym,» added Asgeir.

Asgeir was brought to power lifting by his brother, who that way became his direct competition.

«Last year he was chosen to compete internationally on Iceland. This year it was me in Madrid. We both won, but I lifted like 40 kg more than he did. So I was really proud of myself,» said Asgeir.

Combining family life and training at a volume as Ageir does could be challenging. But he has a simple solution for that.

«My girlfriend is into training as well which is fortunate because otherwise she would not understand that I need to spend 10-14 hours in a gym every week. This way it runs smoothly.»

Asgeir works as a chef at Molde University College. Upon asking why did he choose this  line of work, he answered:

And since the right eating is an iseparable part of any training routine, Asgeird offered one of his recipes.  He describes that it could be cooked very easily and cheaply during watching one episode of Family Guy.

Fry the pork chops on high heat and put them in an oven proof dish with the carrots, on 250°C for 10-15 min.  Peal the sweet potato and dice it finely, so it takes less time to cook. Boil it until it is soft and tender, then mash it with some salt and pepper.

Slice tomatoes and mozarella into thin slices add  some coarse salt and olive oil. Top it off with some barbeque sauce.