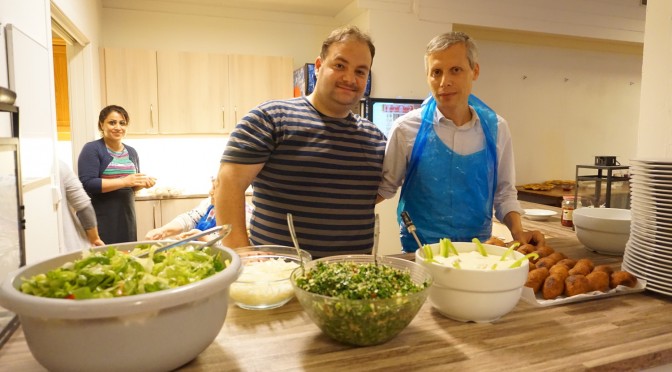 Obaida Dalati (to the right) and his partners cooked food for the event. Photo: Eden Gao

If the war in Syria ends, refugee Obaida Dalati plan is to return to his homeland.

For more information about Syria, a few questions was asked to Obaida Dalati who was one of the voluntary chefs on the event.

– What is happening in your home country now?

– People in Syria have been suffering in a war between the country government and objectors since 2011. The corruption of the government lead to public discontent, resentment and protest. Also many other complicated reasons finally sped up the war.

– Why did you choose to move away from your home country?

– Because of the war, we lost our job and have no place to stay in Syria. What’s more, food and basic medicines are in short supply. We can’t survive there. So we have no choice but to move away.

– Comparing your life before in Syria and now in Norway, what’s the difference?

– Actually, we live better now here in Norway. Before in Syria, we had poor human rights situation: no free elections and no freedom of speech. Women and children suffered from discrimination. Because of the war, our living conditions became even worse. But since we move here, the government of Norway helped us by offering money and food for survival. What’s more, the government gave us the chance to learn Norwegian language and continue to accept education here. Now, most of us have work to support ourselves.

– If the war in Syria finishes, will you go back home?

Here is a recipe for kibbeh – a staple Syria dish with golden brown color – that was offered by the event’s chefs from Syria: