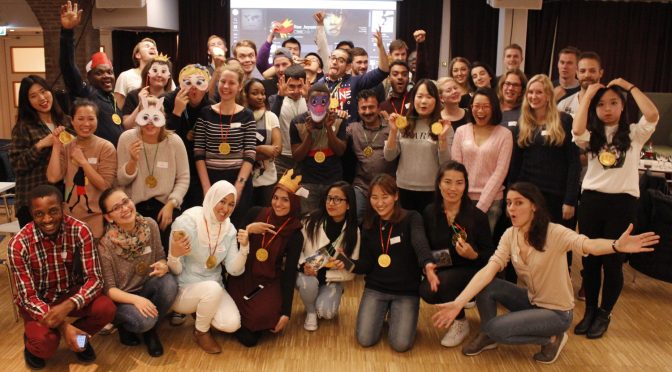 After three consecutive years of the get-together party for the first-year master’s students, no one can deny that the event is benefitting relations between international and Norwegian students. However, there is still a significant gap.

The get-together party for the first-year master’s students has become a tradition at HiMolde. It is often held by the new Student Representative Board with the aim to break the ice between Norwegian and international students.

This year’s event took place last Thursday at the campus canteen. Arild Hoff, associate professor, were happy aboutthis year’s number of participants. More than a half of the people that were invited was showing up:  77 invitations was sent out, 43 students attended.  The event’s impacts were also optimistic. Many laughs, jokes and medals were exchanged among participants having fun.

However, for second-year master’s international students who joined the similar event last year, they admitted that they still could not get closer to the Norwegians who are also their classmates.

Some argue it is because of housing. While international students like the sharing and caring atmosphere of apartments in Kvam, Norwegian students prefer more private spaces and being alone. They live in the student housing offered on Molde campus and Glombo, or using the private housing market in Molde, where they don’t need to share a kitchen and/or a bathroom.

A new exchange student admitted that «I am shy, but I feel Norwegian are much more shy than me». After two months at HiMolde, she and her friends are struggling, trying their best to befriend Norwegian students.

As a reporter covering the team building events during the last two years, it is my opinion that the gap in the Norwegian/international student relationships is not entirely rooted in the typical characteristics of Norwegians. Some Norwegian students are outgoing and active in making new friends.

The main cause of the gap is that Norwegian and international students do few social activities together. ESN Molde is the most active club in the school, and organizes social indoor and outdoor activities nearly every week. However, Norwegian students don not know about ESN activities.

Furthermore, there also exists a myth that ESN activities are only for international students, and not for all.

Changes can happen on the campus if the iStudent starts to send a monthly online newsletter to all students, in which they list all the events organized by school clubs during a month.