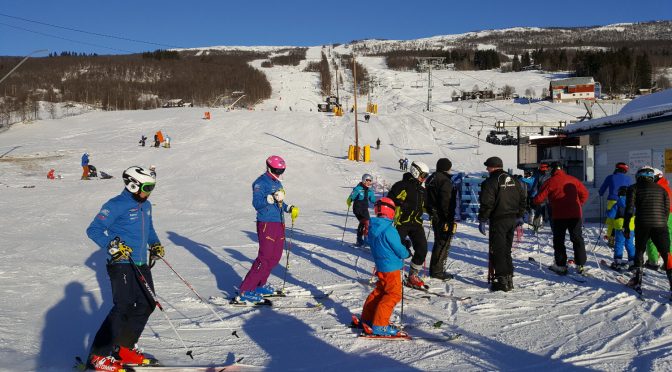 BJORLI (Panorama): Winter is right around the corner, or is it already there?

As you might have already noticed, the weather has been changing lately. The clock set to winter hour, after sleeping one hour longer waking up with frozen grass and/or feet, rain turning into snow from time to time, and the snow coming down the snow line of the mountains peaks more and more each week.

Therefore you might think that winter is coming, or is it already there?

Two weeks ago, Bjorli skisenter was the first in the Molde surroundings to open their slopes, or actually one slope in this case, to all the eager winter fans! We got the chance to go and experience it for ourselves, waking up on a beautiful Sunday morning sun, nice and early, ready to go to Bjorli. Bjorli skisenter is located South-East of Molde, approximately a two hour drive away, with a short ferry ride and some very nice views on your way there, like Trollveggen.

Fresh snow earlier that week resulted in a winter wonderland feeling when arriving at the bottom of the mountain, accompanied by the sun shining straight into your eyes, you know that it’s going to be a great day on the mountain!

We were not the only ones having the bright idea of going for a daytrip of winter fun. Alpine ski teams from Rauma, Stranda, and even Lillehammer, came all the way to Bjorli to train and enjoy the mountain.

With a slope of 600m the skisenter tried to accommodate as much skiers, snowboarders, telemark skiers as possible. At the moment they have opened up two slopes that both are 1400 meter long.

Are you also looking forward to the new winter season? Then this information about the skisenters of the Molde surroundings might be handy:

Tusten skisenter: Opened their first slope the 12th of November

Bjorli skisenter: Opens early every year, this year on the 29th of October

Oppdal skisenter: Opening planned on the 19th of November

So all there is left for us to do, is to hope for some more white gold to come so we can all enjoy a new season of nothing but winter fun!