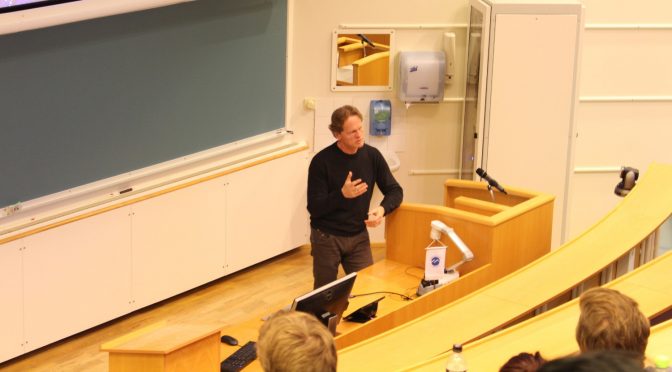 Why should we ban doping in sport? Sigmund Loland, professor of sport philosophy at the Norwegian School of Sport Sciences (NSSS) and expert on doping and ethics, tried to find and explain the answers during his open lecture at HiMolde last Wednesday.

«Should performance enhancing drugs (PED) be banned in sport?»

The title of Sigmund Loland’s presentation deliberately used «PED» instead of «doping» since it lacks the negative connotation the latter holds. It indicated the aim of the whole presentation: to show an objective picture of this ever-important and relevant issue of today’s elite sport life.

The notion of «fairness» was introduced first. In that sense, the using of PED is regarded as cheating, violation of rules that an athlete should adhere to. The ban of using doping provides «institutional fairness», creating equal opportunity between athletes.

Health is another crucial factor when arguing on PED. It is well known that consuming PED is a major threat on the athlete’s health, and can significantly lower the potential life expectancy of the user.  On the other hand, nowadays, professional sport in general is or can be detrimental to health, by the probability of suffering acute injuries, overtraining oneself, or going over the edge in risk sports, such as alpine skiing. Following the logic of banning doping due to its health hazards, competitive sport could be also banned.

The World Anti-Doping Agency (WADA) is the most widely known organization focusing on doping. The organization is responsible for issuing an annual list of components that cannot be consumed by the athletes. They are also conducting regular tests to determine whether the sportsmen violated their regulations or not. In their code, they describe the definition of doping rule violation: doping means that there is «(1) scientific evidence or experience which demonstrates that the substance or method has the potential to enhance or enhances sport performance; (2) medical evidence or experience suggests that the use of the substance or method represents an actual or potential health risk to the athlete; (3) the use of the substance or the method violates the spirit of sport.» (WADA Code, 2015, p. 30.)

As Loland argued, the first two points could be violated just by being a competitive athlete in contemporary top-level sport. The «spirit of sport» in point no. 3 consists of many things according to WADA (2015, p. 14), like «ethics, fair play and honesty, health, excellence in performance, character and education, fun and joy, teamwork, dedication and commitment, respect for rules and laws, respect for self and other participants, courage, community and solidarity».

The next part of the presentation was about the social logic of sports, by which we measure, rank and compare competitors due to their athletic performance. Thus by definition, sport is looking for «a particular kind of human inequality». Sigmund Loland asked the relevant question: which of these inequalities should be compensated for, or eliminated? By his «normative structure» definition, the ones «for which individuals cannot be held responsible» (2002).

The pro-PED side of the lecture accentuated that there should be fairness in competition, equal rights and laws for each competitor, but there should not be anyone to whom competition regulations do not apply. Many liberal sport philosophers argue in favour of PED legalization, thinking of nature as «raw material», for example Savulescu (2007). It would mean, in a way, the «merging of the organic and the technological». Others stressed the importance of «progress and fairness» (Tamburrini 2000), and seeing sport as «spectacle and aesthetics» (Barthes 1972, Gebauer 2000). However, most of the stakeholders are against the legalization, even those – or especially those – who are using PED, since they would lose the competitive advantage that they are currently enjoying.

The audience could also hear the counter-PED arguments. The most important one was probably the «natural» way of doing sport. By allowing doping, sport would lose its natural component, the «chance, luck, and merit», by using drugs as «short-cuts» instead of hard work and talent to reach the athlete’s goals. Sports, according to that point of view, are «the virtuous development of natural talents» (Murray 2009), and it demonstrates human excellence.

All in all, contemporary sport is facing great challenges by the usage of PED and the technical and technological improvements that occur in the area. There is a need of «revitalization of the health and fairness arguments». WADA should also revitalize its «rationale for a PED ban», in case the implementation seems possible and cost-efficient. It is, in Loland’s words, «a challenge of line drawing».

Those who attended this open lecture gained a great insight of the doping topic that proved to be both complex and something that is worth arguing about.