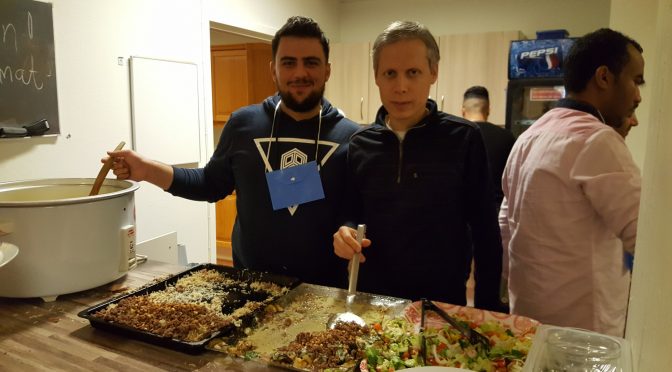 Obaida Dalati (center) and his friends were the cooks of the day. Photo: Benjamin Moeyersons

The mindset of Syrian people has changed due to the war, says Obaida Dalati, a refugee from war-torn Aleppo now living in Molde.

Saturday 19th of November, it was time for another KIA (Kristent Interkulturelt Arbeid) event. This week’s International Café theme was Syria.

«Currently there are about 40 Syrian refugees living in Molde», said organizer, and department manager of KIA Molde, Reidar Andestad.

The basement of Molde Cathedral was once again the common ground for Norwegians, refugees, international students, and basically everyone who is willing to come to mingle around, enjoy traditional food and get to know new people.

Last year we already did an interview with Syrian refugee Obaida Dalati regarding the situation at hand. Therefore, we tried to get in contact with him again to gain some new insight in how the situation has evolved.

RELATED: – I think most of us will go back home

Obaida Dalati, a 37 year old father has been living in Molde for two years now together with his wife and kids. With three sons of respectively 3, 6, and 8 years old, we can already say that it is pretty hard to try and understand the things they have to go through and the decisions they have to make. In order to get more insight, we asked him a couple of questions:

(Editor’s note: The interview was conducted 12 days ago, and the situation in Aleppo is rapidly changing.)

How is the current situation back in Syria?

«In the center of my home city, Aleppo, it is fairly calm at the moment. Being a big city with 5 million inhabitants there are however a lot of different activities going on. Just outside the city center there is still a war going on between the army, ISIS, and even Russia.»

Is your whole family here in Molde?

«No, my mother and sister are living in Turkey at the moment. My two brothers are still living in a small village outside Aleppo, where Daesh (Islamic state or ISIS) is currently trying to seize control. Daesh and the opposition are now at two kilometers distance from each other, making it impossible for my brothers and their families to leave their houses because it’s just too dangerous!

Nowadays everybody in Europe and the United States are talking about ISIS, but actually Putin, Russia, is even more dangerous in Syria. Both ISIS and Russia are bombing hospitals with helpless children. Day in day out newspapers, tv stations, and every possible source of media is still filled with ongoing horrible events that have taken place.»

How has your life in Norway been so far?

«My life here the past two years has been good. The biggest difference is that people live in peace here, there are no problems and people can just enjoy their lives. Even though it used to be better for me back home in Aleppo. Syria had a good industry and a well working economy, people earned a fair amount of money and had good jobs. I used to be a business man and due to the high life standards in Syria, life used to be better there than it is here in Europe.»

If the war is over, are you still going back to Syria?

«Most Syrian people had pretty good life standards before the war. So from an economical point of view, I would immediately move back to Syria. But, even though it used to be an economical very interesting city, the mindset of people has changed due to the war. People have seen so many deaths throughout the years that their perspective on life has changed, the culture has changed and it scares me to experience that. 600 000 people have died already so far, of which 22 000 children, and 11 million people have fled from their homes to escape from the non-stop madness.

Therefore I’m trying to open up a small factory and start a new business here in Norway. If everything would get back to normal, I would definitely go back to Aleppo. What matters most is the future for my children, and for them to be able to grow up in a peaceful environment without any problems. That is my highest priority!»

To end our conversation on a good note, we all sat together to enjoy some traditional Syrian food: Sheik El Mahshi (Lamb Stuffed in Aubergines Casserole).

In this case we have kept the recipe for you to enjoy as well: