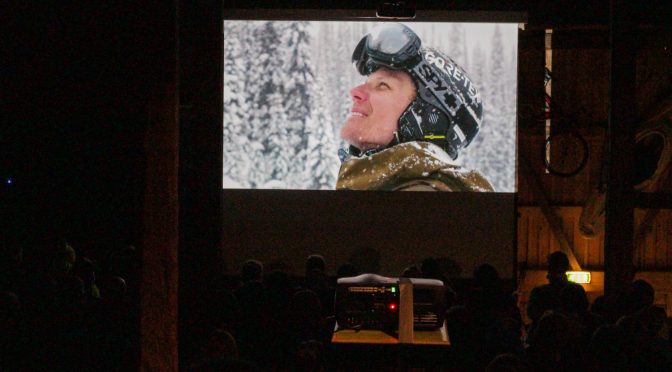 Monday, this year’s Fri Flyt Film Tour stopped in Molde to present three of the latest freeride and skiing movies. In short: powder, powder and even more powder.

Since 1998, Fri Flyt, Norway’s leading sports magazine covering ski sports, climbing, cycling and surfing has been annually organizing film festivals all around Norway. This year, they have been making stops in 15 destinations since their premier in Oslo in the end of September. For Molde, the crew around project leader Brynjar Åmot provided a special location for the screening: DID sports farm, an old wooden barn next to the airport.

«Here is a better atmosphere than in Aker Stadium!»

The predicted low temperature in the barn, and the consequently warmly-dressed audience, did its bit to the wintery motto of the evening.

RELATED: Skiing down spines of the worlds hardest terrain

Therefore, it was more than welcome at the organizers handed out beanies and tubes for some lucky winners. When the first movie – «Line Traveling Circus» – started, everybody was caught by the incredible pictures that just contributed to put oneself into the shoes (and skis) of the actors on the screen.

This short film is an episode of the «Traveling Circus» that dedicates itself to produce extraordinary and unique clips with simple camera equipment. This time, it depicts a bunch of skiers around Even Sigstad who did a roadtrip from Oslo to Folgefonna and Juvass looking for the best spots for summer shreds in the parks.

The second movie was probably the highlight and reason for most of the viewers in Molde, since Asbjørn Eggebø Næss is one of the protagonists: «Shapes» by the Norwegian skier and movie maker Nikolai Schirmer. It was shot in the area of Lyngen, as well as Canada and France, and premieres at the film tour. The whole movie is without spoken texts, but aerial drone shots, slow motion pictures and drum sounds totally capture one’s imagination.

«It is the best time of your life.»

This quote from «Drop everything», the feature movie of the film tour, probably stays in most of the viewers’ minds together with the breathtaking shots taken in Whistler (Canada), Squaw Valley (California) and other destinations in North America.

This production from the American company Matchstick Productions gives a humorous insight in the life of Cody Townsend, an American freerider known for skiing the most insane lines ever, and his wife Elyse Saugstad, former world champion in that sport herself. Historic video shots from the previous century from Squaw Valley made the audience chuckle, especially due to the immediate relation with today’s technologies and styles.

According to filmtour.no, the director of «Drop everything», Scott Gaffney, wants to make «people walking away from our ski movie smiling, laughing, and feeling like they can’t wait to click into their skis again».

Without exaggerating, this mission was undoubtedly accomplished this evening. The only thing that is missing for this now: actual snow.