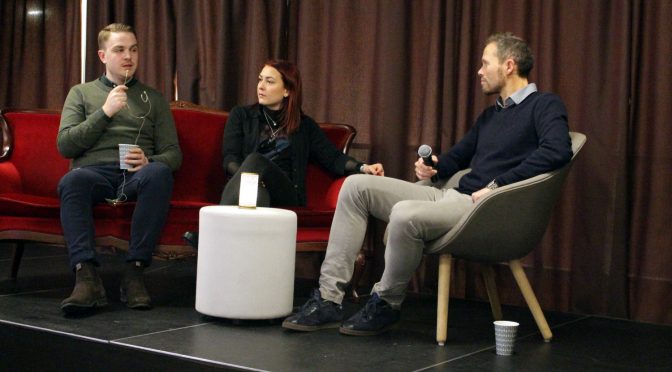 Recent Sport Management graduates Ingvild Aarland and Ørjan Dimmestøl returned to HiMolde to talk about their internship at the Norwegian Football Association and about their award-winning Bachelor theses.

The reason for coming back to Molde the first time after finishing their Bachelor in Sports Management last June was a special one for Ørjan Dimmestøl and Ingvild Aarland: In the halftime of Sunday’s Eliteserien match between Molde FK and SK Brann (with a last-minute win for MFK) they received this year’s «MFK-award» for the best Bachelor theses.

Especially Ingvild was highly surprised about that:

«I was on the stand when Magnus and Gøran received this award last year and I said to a friend ‘I will never get that.’ But apparently I did manage that. It makes me really proud to get this price, even though I did not write about football.”

Indeed, for her Bachelor thesis, Ingvild chose to write about why minority girls are underrepresented in Norwegian sports – a topic she also dealt with during her internship in the social responsibility department at the Norwegian Football Association (NFF).

By examining the existing literature on this issue, she finally drew two main conclusions out of it: «On the one hand, there is a considerable economic factor. Norwegian sports has become quite expensive and many minority families have a lower income. On the other hand, parents of minority children do not see the same value in sports as Norwegians and often do not understand how to get into sports and clubs.»

For a deeper understanding, she currently continues on this issue as her Master thesis project at the Norwegian School of Sport Sciences (NIH) in Oslo. Additionally, she also got a part-time job in the same department as she did her internship:

«I definitely see my future there and this question ‘why are those minority girls the least participating group in Norwegian sports?’ is very topically since so many people in Norway have foreign backgrounds.»

Ørjans success story reads similar: Just as Ingvild, he also got a position at the Football Association, namely in the HR department, where he also did his internship.

«Already during the internship, I got lots of responsibilities and projects, probably more than they planned for me. Finally, I got a contract until the end of this year. But there is a little bit of hope that they will keep me longer.»

Originally, he intended to go for an internship in one of the two big Norwegian sports broadcasters Eurosport or TV2. But finally, he decided for the Norwegian Football Association, mainly because of the prospect of getting a job there after the internship. Nevertheless, especially since the start of his Bachelor, he has always been interested in sports media and therefore also wrote his award-winning thesis about media rights in Norwegian football. Currently, he takes a part-time study at NIH for young leaders in sport.

That he indeed possesses leadership skills Ørjan proofed as leader and founder of the student organization Sport Management Seminars (SMS), where he organized several lectures from sports business professionals.

«Last year we really had start with the lecture of Rob Kurvers from Feyenoord. Unfortunately, Sport Management Seminars became kind of inactive in the last semester. I hope, they get up again this year.»

Personally, he is still looking for a job in the sports media business:

«Also marketing is a possibility for me. It should at least be a position where you work closely with sports.»

Being an MFK-award winner is definitely a good precondition for that.