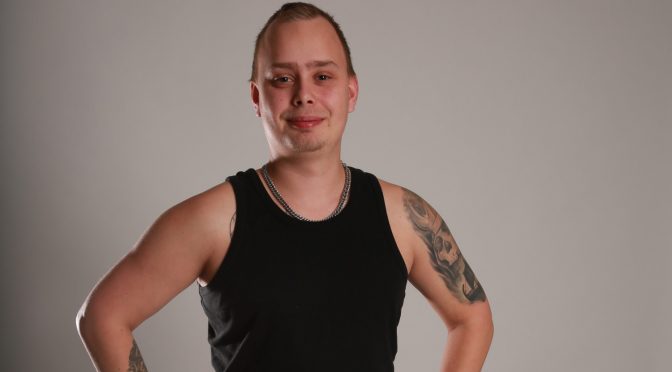 HiMolde student Ruben Nicolay Auren has several tattoos and each of them has its own story. However, for him it’s mostly the design that matters.

Ruben Nicolay Auren (25) from Trondheim is studying second year of bachelor program in accounting and auditing. His biggest hobby is working on his car. He also enjoys sports like football, volleyball and skiing (especially cross-country), and playing video games.  He is also volunteer in ESN, te international student organization, and the Åpningsuka 2018 board.

He got his first tattoo when he was 20 and served in the Norwegian armed forces. He was part of the Royal Norwegian Navy, and as he likes the ocean and sailing, he wanted something connected to it.

«I just went to tattoo studio, gave them few ideas, explained them, I want something that represents me and this is what came out of it. There is a skull and Viking boat. I think it represents my personality well. However, my tattoos are more about the design, I want them to look good.»

The second one on his chest, he got in Turkey while he was on vacation.

«I got bit drunk and popped into a tattoo studio and got it. I told them I wanted something similar to what I had on my shoulder, but with Slavic symbol as I had a girlfriend from Poland back then.»

Even though, he doesn’t have the girlfriend anymore, he is totally fine to have it, as he still really likes the Slavic culture. There is a skull and Slavic symbol on his chest. «I don’t really remember what the symbol means, but I think it’s my most interesting tattoo, I have. It might not be the best one I have, but it has definitely the best story behind it. It was very spontaneous and I like it in that way.»

The third one is a wolf on his forearm. That one Ruben planned for a while.

«I wanted a wolf or a dog. I had a lion dog that died just before I got this tattoo, and I missed him a lot, so I wanted to something connected to it,» he explains, and adds: «Furthermore, there is a lot of symbolism behind the wolf, like loyalty, teamwork. I used to be the exact opposite, the person, who wanted to be alone and teamwork was my worst nightmare, but I wanted to change it, to be more team player and I think, it has changed now. So, it kind of also represents myself.»

Ruben doesn’t think about the meaning of tattoos that much, it’s the design and look that’s more important to him.

«I get the tattoo, then it has some meaning for me, but it might change. I want to finish the Slavic and wolf tattoo now, but then I will continue. I want to cover my entire right arm. I won’t add any to my left arm though; the Viking is good by itself.»