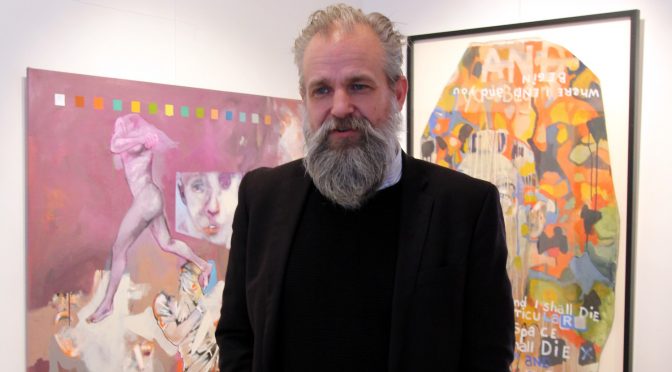 Per Olav Bergem and his works: “In your full stop” (left) and “Greetings from a dead man”. Photo: Elmira Tukaeva

KLEIVE (Panorama): Saturday, Galleri S organized an exhibition opening with works of art by artists and friends Per Olav Bergem and Karl Bryhn, both of them from Molde.

Galleri S and it’s owner, Sigmund Skår, presented the audience with paintings by contemporary artists Per Olav Bergem and Karl Bryhn. The two friends are former students of the late artist Jan Aunvik, and both had the late artist Vegar Werner as a mentor.

Bergem lives and works in Molde and this is his 3rd exhibition. He started drawing at the age of 10, but at the age of 16 he realized that he wanted to dedicate his life to painting. Influenced by the novels and poems of the American author Charles Bukowski, the abstract works of Per Olav both scream and hold compassion for the reality of modern world. His paintings have no clear faces, but objects with a deeper meaning.

George Orwell’s novel “1984”, written in 1948 and predicting the consequences of a totalitarian regime with unlimited access to surveilance of it’s citizens, and it’s later screen adaption starring British actor John Hurt, inspired Bergem to express his feelings in the painting titled “Greetings from a dead man”.

Calling himself “a lonely wolf”, Per Olav Bergem’s dream is to share his life with someone who is looking forward to adventure and romance. He mercilessly, bravely and honestly disproves that men don’t cry.

“If a man ever cries, his tears are so heavy that himself, he feels like a slaughterhouse,” Bergem says.

His friend, Karl Bryhn, lives and works in Oslo, and this is the first time he exhibits his works in Molde. In his paintings, Bryhn clearly shows the faces of people, opening the veil of human thoughts. Bryhn observes people or events, and then he imprints it on canvas.

Bryhn’s family members often are the motives of his paintings. His wife Kaia describes him – in everyday life – as goal-oriented, and says he knows exactly what he wants, and gets it. But when he starts painting on a new work, he often does not know what the final result will be.

In the one of his works, Bryhn expresses the lack of people’s understanding of numerous things in the world. He thinks that even though constantly evolving, people remain bounded in their capabilities and cannot know everything. Man’s unknowledge and fear to fly, creates chaos in his tiny internal world and drags him down to the earth in the hope of peace.

Bryhn says: “Everything in the world moves and has it’s ending, but painting never ends … And it’s fascinating!”

Per Olav Bergem’s and Karl Bryhn’s paintings will be exhibited in Galleri S until December 10th, where both beginners and the sophisticated audience can enjoy the contemporary art and unravel the world of riddles and unique stories behind their works.