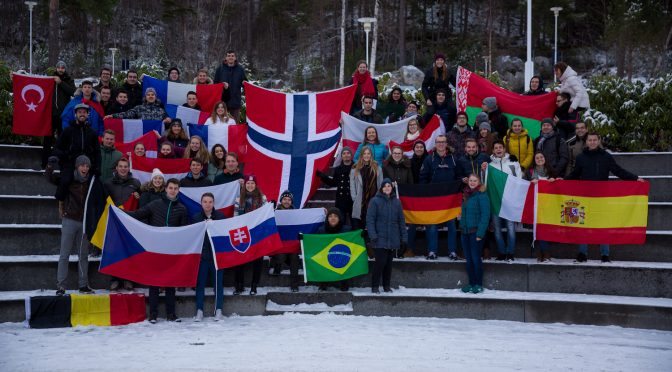 Erasmus Student Network (ESN) is an organisation that helps international students enjoy their stay abroad. With a new upcoming semester, there are several events planned by ESN Molde.

“We are planning a welcome party for all the new international students after all of them have arrived. We will also organize international day, when students can represent their country and teach the others something about their homes. We are also planning to go on a trip to Bjørnsund on 22nd  March and cabin trip at Silsethytta from 9th till 11th March. In corporation with ESN Norway, we will organize a trip to Lofoten.”

ESN also organize smaller, regular events at school as board games evenings and movie nights. It is a great opportunity for the students to gather and get to know each other. There are also several sports events planned.

“We will have table tennis tournament, which was very successful last semester, and football and volleyball tournaments,” says Timothy, and further explains: “ We decided not to organize Erasmus Games, an event that takes part all over Europe. Last year ESN put a lot of effort in organizing this event and the participation was very low, as there are less international students on campus in the spring semester. So we decided to organize more sports events, which will take part during the entire semester, but won’t be under the Erasmus Games umbrella.”

For those, who would be interested in joining ESN, there will recruitment for new members going on from 25th January till 4th of February. During the last week of January ESN is going to present their organization and what they do.

If you are interested to become a member of ESN, do not hestitate to contact the president of the organization Timothy Nemytov or vice president Nikola Krahulcova. You can find more information about ESN and their events on their Facebook page.