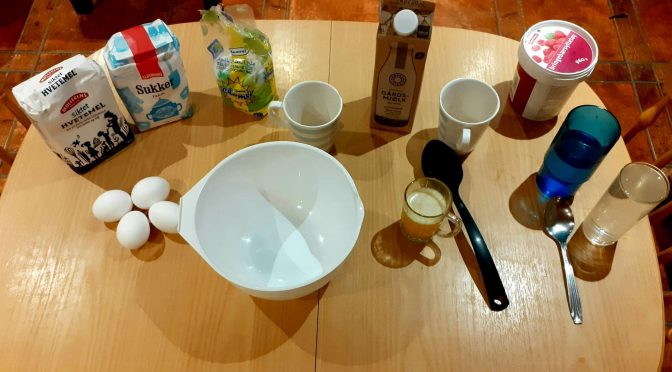 About to start mixing the ingredients. Photo: Rabah Taif

I always had a fascination with cooking, but never ventured into the kitchen myself to cook because I was always scared of setting my house on fire or burning the food.

In order to find a way that would be quick and easy enough for me to follow, since I was cooking waffel for the first time, I went on Google and searched: «Tips and Tricks to cook Norwegian waffel in under 15 minutes.» I was not surprised when hundreds of different videos and Norwegian stories came up, I went for one short video and quickly learnt how to make it. I am a sucker for anything sweet and tasty, and this Norwegian traditional waffel seemed to have both of those elements.

How I Made It

When I got home from Rema 1000 with all of the ingredients, I started to prepare what I was going to need. I measured: 4 eggs, ½ cup sugar, 1 ½ cup flour, 1 tsp. baking powder, pinch of salt and ½ cup melted butter.

After I had all of the ingredients laid out on my table. I added the 1 ½ cups of flour into a large mixing bowl, 1 tsp of baking powder, a half cup of white sugar and 1tsp of salt, then, started to combine and mixing the ingredients. I poured two cups of milk, 4 eggs and then mixed it well until it became smooth. After that, I preheated the waffle iron, and when it was up to temperature, I sprayed the cooking surface with a non-stick cooking spray. Later on, I started pouring just enough quantity of the mixture I made to fill the iron, I closed the lid and let cook until the lid came away easily and my waffel were gold and brown between 6 and 8 minutes. I served to my friends to taste and give their opinions.

I enjoyed cooking a lot more than I thought I would by the time I was finished. I realized that the part that probably knocks some people out, is going to the store to get the proper ingredients, but after that is done, then it is really pretty simple to follow a recipe. I liked how I was able to make the Norwegian waffle that I wanted and see a finished product by the time I was finished. Even though I have relatively bad anxiety, worry and uneasiness about cooking and everything else, I was still able to accomplish this task successfully with friends nearby just in case anything went wrong. It was really an amazing and first funny experience for me in Norway.

I would highly recommend trying to get into the kitchen and see if you like it because you never know what will happen unless you try!