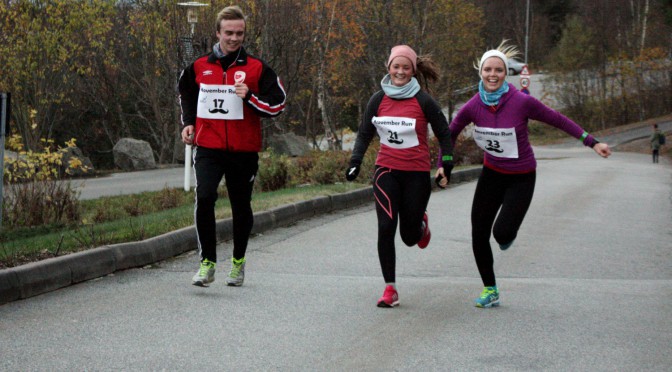 Molde town was coloured by students who participated in Movember Run, a charity event aimed at raising awareness for men’s health issues, on Friday afternoon.

MSI (Moldestudentenes Idrettslag) – The Molde Student’s Sports Team – organised the 6.5 km event for the second year running, raising around a thousand kroner for the charity.  Participants were entitled to pay an entry fee of 30 kroner or more and three winners were awarded with gift vouchers from G-shop worth 500, 300 and 200 kroner in both male and female categories.

“This event was called November Run last year, but since the month of November is meant for men to grow a moustache, we thought that it would be fun to incorporate the idea and call it Movember Run, but it is basically the same principles as last year`s with the same routes,” said MSI leader Henriette Goksøyr.

Ricardo Kersul came in first for the men’s division, completing the race in 29.30 minutes followed by Håkon Stensaas 29:36 and Thomas Rekus 29.36,5.

For the female category, Jenka Mergaert came in first finishing the race in a record time of 38.01 followed by Ingvild Sandven 41.50 and Stine Johannessen 41.50,1.

19 male and only 3 female students participated. All the women automatically won gift vouchers,  while the men had to battle for the prizes.

“I participated in this event to not only donate, but also meet new people, see more regions and enjoy,” said Thomas Rekus, who had come in third, in the men’s category. “

«I participated in a lot of sports in Belgium, but here I cannot do  anything so this was a good thing for me to be part of,” said Jenka Mergaert, who won the female category.

The men’s  category winner, Ricardo Kersul, said that he was not only happy with the results, but the reason for the run.