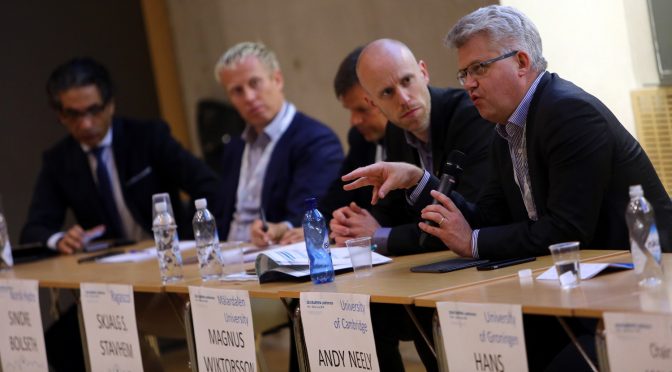 The 23th EurOMA conference took place in Trondheim 17th-22nd June. This year’s programme included a special session on Industry 4.0, which reflects the increased interest in this particular field, and corresponding concepts as Industrial Internet, Internet of Things and Cyber-Physical Systems.

TRONDHEIM: In Norway, several seminars and workshops have been organized on the topic mainly targeting the industry. However, these seminars have been at a relatively general level, and there is still a need to fill this concept with practical content. Can increased engagement from the academia help the industry on their journey into the next industrial revolution? That is what the number 4 in «Industry 4.0» indicates. We have all learned about the first industrial revolution with steam power and mechanical manufacturing, the second with mass production and division of labor, and the third industrial revolution starting in the 1970s with IT and automated manufacturing.

Now we are being told that we are at the beginning of the fourth revolution based on so-called «cyber-physical systems». What is it really? And what does this mean for companies and their operations? I went to the EurOMA special session on Industry 4.0 hoping that the 90 minutes could make this concept clearer and more concrete to me.

Strandhagen kicked off the session with a brief lookback on history with a quote from Charles Babbage, a 19 the century mathematician, philosopher, inventor and mechanical engineer:

«I was sitting in the rooms of the Cambridge Analytical Society, my head leaning forward on the table in a kind of dreamy mood, with a table of logarithms lying open before me. Another member, coming into the room, and seeing me half asleep, called out, “Well Babbage, what are you dreaming about?»

Babbage dreamed of making calculations using machines, and is considered as the first using machinery for calculations. Babbage’s dreams contributed to realizing the revolution within information technology, which we have experienced the last decades. Is Industry 4.0 a dream that may lead us to a better future in the 21th century? Then the revolution must be driven by needs, as it seemed to be the case for Babbage.

The audience could voice their viewpoints not only the old-fashioned way through comments, but also by accessing a (cyber-physical) survey, where the first question was “What is Industry 4.0?”, with a number of alternative answers. Most of the audience agreed that it represents a digital revolution that will change the way we work, however 22 per cent voted for the alternative «a buzzword». Is it only a buzzword or hype created by vendors wanting to sell more systems, instead of a dream that will change the future?

Wortmann suggested that Industry 4.0 could be looked upon as a Pandora’s box, containing «Internet of Things», «Big Data», «Cyber-Physical Systems» and robot technology. Several challenges needs to be addressed, like how to proceed with investments, the role of humans, ownership of data, and the boundaries of the smart factory, where he emphasized that society should be a part of it.

In his introduction, Wiktorsson focused on four central aspects, which is connectivity, technology, sustainability and business logic. Neely referred to the particular challenge associated with the new technology that the relations between companies becomes very intricate. They will reciprocally depend on each other in a new way.

From having discussing these quite general aspects, I was eager to hear how the industry had approached the fourth industrial revolution. Ragasco appeared as being the company that has come far in the implementation of new technology, mainly internally in the company. They have used technology to combine productivity and zero-defect, for instance by monitoring parameters that are visualized, which makes it easier for operators to interact and make better decisions. By implementing this, which they later learned was Industry 4.0, they have managed to reduce time to produce from 74 to 14 seconds. In the near future, they want to use technology to online integrate with their customers and suppliers.

In general, the companies have implemented elements of Industry 4.0, but lack full integration trough cyber-physical systems. According to Hemyari, the aim is to create a one-piece flow in manufacturing. Neely emphasized that the new technology will create new business models that will have large impact on industry and markets. This reflected back on Wortmann’s claim that the owner of the data, which will become important in the fourth revolution, is in fact the owner of the business model.

In-between the discussions, the chair carried out new polls involving the audience. The audience gave their opinions regarding the status in the industry in the implementation of Industry 4.0. The result was clear; the industry is in general immature. All panel participants agreed that cooperation between academia and industry is important to bring the Industry 4.0 or Industrial internet initiatives forward. That triggered a comment from the audience, asking whether academia can do research on a phenomenon that does not exist, as the companies still seems to be at an Industry 3.0 level. The publication system may represent a barrier for developing cooperation between the industry and academia in this field.

Competence appears as a barrier for the implementation of Industry 4.0. In that connection, Stavheim could tell that actually the same people has been with Ragasco on their journey in implementing new technology in their manufacturing. The employees have been eager to educate themselves, and the company has facilitated this, which indicates the importance of leadership and flat structures in organizations as facilitators for the implementation of Industry 4.0. Furthermore, this provides guidelines for education in countries with industries embracing Industry 4.0.

Despite of a relatively open beginning, and some reflections regarding the human factor and knowledge, most of the discussion was technology focused. A participant from the audience commented that there seems to be a technology pull, rather than a push from the society. We should address the big issues that now confronts the society and see how new and enabling technologies may contribute to solving these challenges, as sustainability. Inspired by Babbage, challenges and problems must lead to technological progress, not the other way around.

The discussion reflected that Industry 4.0 could indeed be looked upon as a Pandora’s box, containing a wide range of concepts and exiting ideas, but it still fuzzy in the sense that there are several areas that needs exploration. All panel participants agreed that to do research on Industry 4.0, it is necessary to break down the problems to smaller research questions. In this respect, cooperation between industry and academia is of vital importance.

The special session was a small step in that direction.