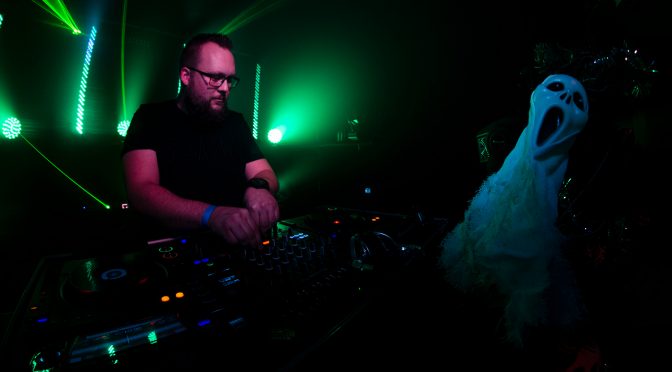 Even if some long living Molde night club venues have transformed into fitness clubs, there are still DJs pleasing the dance and electronica crowd.

Saturday, both Vaksendisko og Electronic Family club concepts is aiming to fill the dance floors. Electronic Family will be hosting Venners venners fest 3.0 at Reknes Ungdomshus, and parallel to the event is the Vaksendisko Exclusive to be held at the theatre. Party-hopping and two places at once, this is going to be lots of fun before the exams.

To get the finer details on the upcoming events, we interviewed two gentlemen who form part of the four men Electronic Family group – Pål Thomas Høstmælingen and Odd Roger Fremstad, and friendly Tobias Heiberg, who is the organizer of the Vaksendisko Exclusive. The energy and passion for music from these men is contagious.

Get tickets for the events here and here.

The interview with the Electronic Family organizers were done by chatting over Messenger:

Pal Thomas, tell us more about the Electronic Family, a small background and some detail about past events?

We are 4 people behind these events. Me, Odd Roger Fremstad (59 year old dj) -me and roger are the main 2 people behind Hjertøyafestivalen 2017 & 2018, Jan Ove Moen & Jan Arne Janssen (both djs and company owners of SoundBase AS). I’m a hobby-dj, working as a surgeon at the hospital, and will have my first gig in Bulgaria 20th April. To sum it up for you, it started with Hjertøyafestivalen 2017 in September (on the island!!!), then Hjertøyafestivalen 2018 September @ Retiro, this year is a break from festival, instead we are making several smaller techno-events in a small building close to the football stadium. Venners venners fest 1.0 in desember-2018, Venners venners fest 2.0 in february-2019, and third one coming up now next Saturday. Our mission is to evolve the electronic-music-scene in Molde with the latest grooviest tech-tunes for music-lovers. We don’t play radio-music; we play the real good stuff. We don’t care about the money; we are all doing it in our strong burning passion for electronic music.

What do you enjoy most about music and is there anything you would like to change about the industry? If you can describe your sound in 3 Words.

My sound is dark + trippy + techy. i enjoy mostly how the music makes me feel. If I could change one thing, it would be how the industry is too focused on money. Our events hardly make money because the electronic society is small in Molde. Usually we barely are able to make enough money to cover the expenses.

How do you balance with work, family and music?

I’m 38 and I’m single, so I have a bit more free time this is my hobby. Same goes for Odd Roger, he is single as well. He travels to Ibiza each year, and has been there 35 times! And I have been in Ibiza with him the last 4 years. Each year we come back with new inspiration for music.

Okay Pal, so who are your favourite artists?

For me there are so many, It’s hard to choose, but i really like Kevin Knapp, Audiojack, Richie Hawtin, Rub a Dub, De La Swing, the list goes on..

How did you guys come up with your group name?

Because we have the experience that music bonds people and creates friendship.

Have you considered music production, a studio maybe? And do you play any instrument?

I was creating some music 15-20 years ago, but since never tried again. I don’t play any instrument other than the dj-set.

Have you ever dealt with performance anxiety?

Nope, I haven’t performed so much officially other than once in a club in Molde, but I played a lot at private evens and parties. You should interview Odd Roger too! He is the real artist among us! He has been a dj for 40 years! I have been a dj for like 1-2 years.

So what is your view in regards to how most people associate electronic music with drugs,   Have you encountered drug during the festival? And as a doctor any comments?

Let me be very clear, we don’t promote drug use. Our primary goal is to let people enjoy music, music exploration not drug exploration (smiles). There is illegal drug use in all festivals regardless of music. There isn’t particularly more drugs at electronic music concerts compared to other especially rock concerts. But electronic music is the «new» / «rebellious» genre of our time in which people blindly blamed for being fully associated with drugs. Before that in the 80s it was ACDC. And during the 60s it was the Beatles! They were banned from the radio because the government thought that the Beatles were the reason for drug use.

True people can use drugs with or without the music.

I meant people use drugs regardless of music genre.

Odd Roger I hear you have been to Ibiza more than 30 times, what draws you to Ibiza?

Hehe the music. I was driven to clubs in the 90’s and I took many trips to buy record for starters and listen to my favourite Djs. My inspiration comes from Armin van Buuren! Because he play with heart and soul! So I have visited now 33 times and plan to move there and only work with music in 4-5 years.

So lbiza will be your retirement home. What kind of music do you play, if you can describe your music in 3 words?

Music that starts your heart! And makes you want you to move! Electronic!

So not only do you play and mix the music you’ve got the moves too.

Longest mix I did was 15 hours no break. Yes we need to make people smile!

Have you ever dealt with performance anxiety? In the first days of your music journey maybe.

I grew up in a music family and never had problem to stay and play. But sometime I was nervous but then you play best with full focus on what you do.

What has been the highlight of your DJ career and any worst experience?

The best is play in Ibiza Club and big motor festival in Sweden. 20.000 people were there, BUG-RUN MANTORP. The worst time was when the system in the club stopped, it happened many times in the 80 because of bad systems in the days and it’s not nice when that happens.

What is your advice to people out there who love music but are scared to join the industry?

Just get some controller and start to practice. It’s not so expensive to buy it now. After practicing talk to people like us and if you need help we help. There are many people in our Festival and party; we let people try and practice first. It’s not easy to start in the club, before you have practice a little and know how it works. Learning to put right music together takes time. But it’s practice only.

It’s good to know you’re out there giving help. Have you been a DJ at one of HiMolde parties and when should we expect you to grace us with your sound?

I like to say I learn new things every time I play. Hjertøyafestivalen is my “baybe”! And I play there. New music is my thing.

We will be expecting you at one of the school gigs. To sum it up Odd, what fireworks should we expect this coming Saturday?

If you’re in for a disco ball swing this Saturday, turn up for Vaskendisko, which translates to Disco for adults. The following interview was conducted by phone:

Tobias Heiberg, tell us about the genesis of your music journey?

Basically we’re 5 people three DJs who love to play music and two people who love to dance to music. So we organized events at the theatre and we ended getting a collaboration with the theatre that how we began to organize parties mostly it started when we wanted to make the night in Molde that we felt we were missing and we wanted to give that to ourselves.

When did you start as a group?

I’m not sure, but I think it has been three years so far I think we started some time in 2017. The collaboration with the theatre started very small. At first we were allowed to use the venue on Saturdays and we decided that if we get 60 people we would be very happy and it went from 60 to 120. After that the theatre approached us and they also wanted us to do it again as much as we also wanted to do it again. We were allowed to use the big space in the theatre and the Café. So since then it started to grow and now when we host the Disko in the theatre. We have between 400- 500 people over the course of the evening and this Saturday we will be back where it all started, in Storyville. It is where the theatre and the library is.

How do you fund the Disko, is it from your own pockets?

No, it’s because we have collaboration with the theatre. We use a lot of time, but we do not have a lot of direct expenses.

Vaskendisko, does this mean you target old people only?

No, that is wrong. Vaksen means adult.

How best can you describe your sound?

Have you encountered people abusing drugs at one of your events?

That’s where the “adult” part comes in . (laughs) We are doing it because we love to dance and we like to play and listen to good music. Of course it is a good night out and there is a bar, and if you really need to be involved in those kinds of things, then I think you should be somewhere else. (laughs) At our events we have not seen people using drugs.

One thought on “Dancing the night away in Molde”